What anteena to prefer Helical or Yagi? and why?

I at Makers Asylum(India), are building first version of the ground station.
I am from the antenna team and have the following queries:

P.S: I am also looking for the antenna basics and fundamentals reference book for helical and yagi anteena, any suggestions?

The type of antenna depends on the the polarity of the satellite at the other end. Some are circularly polarised and hence a helical antenna. Others are yagi so either horizontal or vertically polarised. The simple rule of thumb is that you’ll lose about 20dB of signal for a incorrectly polarised yagi and I’ll guess you get a similar amount with circularly polarised.

The dents shouldn’t make too much of a problem the driven element length will have a greater effect. The remaining parasitic elements will have a reduced effect but it’ll be negligible.

Try the ARRL’s antenna book for general stuff. Mainly about HF though.

You can do all three with a cross yagi. http://www.hamtv.com/oal.html#7cp similar to this you could do vertical,horizontal and circular.
A helical will lose some db with the others (other than circular but it will work fairly well the loss is 3db not 20

The above references are great (ARRL handbooks are wonderful).

May I also add:

Introduction to Satellite Communication by Elbert, Chapter 4 (Microwave Link Engineering) has a section on polarization and free space losses.

Whilst working on stuff, my mentor suggested this book, and I’ve found it handy for this sort of thing.

Due to the Faraday Rotation (Faraday effect) the antenna should be circular polarised. For this reason, between Helical antenna and Yagi antenna, you must use the Helical one.
Another option is to use two Yagi antenna with cross configration in order to achieve a circular polarisation.

And another option more, is to use a Eggbeater antenna (eggbeater by K5O5)

Helical or Crossed Antennas (such as Crossed Yagi or else) is to be preferred here. Both can realise circular polarisation. The position of the satellite is changing and so is the polarisation. The maximum loss is 3db.

If you go for a linear antenna the loss is 3db from satellites with circular polarisation but 20db when you hit the wrong linear polarisation.

I am extending my post a bit. I have done lots of reading to figure out what is the best setup and will share Some thoughts on the best antenna setup for the given frequencies of 144 mhz and 435 mhz. As previously mentioned for this specific case circular polarization is best. But you are still stuck with the antenna decision. The lower band will require a bigger antenna for sufficient gain and the SNR you will be really low.

Helical antenna for 435:
+Relatively easy to build
+Circular polarization
+Moderate size for 435 Mhz
-Not feasible for 145 MHz (would require about 1.3m base radial diameter)

Turnstile
-Not directed
-Gain is -3dB versus the dipole. OK for NOAA and ISS but surely not enough for cubes.

Turnstile-Not directed-Gain is -3dB versus the dipole. OK for NOAA and ISS but surely not enough for cubes.

Is this 3 dB loss compared to dipole due to the polarization (linear vs. circular)? If so, I think the turnstile is better than a dipole since the worst case cross-polarization loss of a dipole can be 10s of dB.

Also note that most turnstile and quadrifilar helix designs are directional in the vertical plane, i.e. you lose more at zenith than at the horizon, but this is usually a desired effect, since the distance to the satellites is smaller at zenith so the received signal is stronger.

I have been testing a turnstile antenna for 137 MHz this weekend. While waiting for NOAA satellites I tried listening for cubesats transmitting on 145 MHz. Even with a de-tuned turnstile I had quite good reception of XW-2D, which transmits with a 50 mW CW beacon and 100 mW, 20 kHz wide linear transponder, see screenshot. 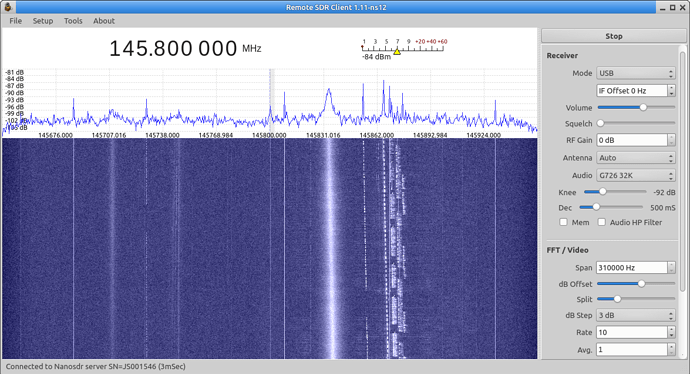 I used an Airspy device.

Thanks @csete for the report! Measurements are good to have. Perhaps this opens the possibility of a feasible (but lower capability) SatNOGS station without a rotator. The entry-level version?

I should probably also mention that I live in an RF quiet area and that’s probably a prerequisite for being able to use this kind of antenna efficiently. One of the advantages of directional antennas is that you can point away from the source of interference even though this may reduce the coverage area.

Thanks @csete for the report! Measurements are good to have. Perhaps this opens the possibility of a feasible (but lower capability) SatNOGS station without a rotator. The entry-level version?

There are some eggbeater antennas that are engineered specifically for satellites (M2 has a full line of these for 2m/440). There are homebrew models as well but I’ve read very poor reviews. To be real successful in satellite work they really need LNA/preamps but it is definitely a possibility. In my opinion, an eggbeater with an LNA in a ‘dead zone’ is better than no ground station at all!

I went looking for the issue that we have to support a flag for ‘stationary’ ground stations but I can’t find it - nonetheless there is a workaround, set up rotctld as a dummy device and it will take the az/el commands from satnogsclient even though they won’t do anything.

Loosely related to this, we have a ‘minimum pass elevation’ field in network (say my feasible horizon is 10 degrees, I don’t want any passes below that) - we could do the inverse of that and easily support people who have a horizontally fixed antenna on a azimuth rotator alone, say they can pick up passes from 0 to 20 degrees as a satellite passes a horizon. (random thought… @pierros?)

I think we can make the custom horizon idea a bit more advanced. We might be able to give people the opportunity to describe specifically what part of the celestial half-dome their ground station can execute observations. Like describing an area using Az/El coordinates. Thoughts @cshields ?

In commercial VSAT terminals we work with the concept of blocking zones and no TX zones. A zone is basically and area defined using two [Az, El] coordinates as if it was a rectangle, just like @pierros said.

Blocking zone means that there is an obstacle in that area and signals may not come through, but there are otherwise no restrictions.

A no TX zone is a zone where TXing is not allowed, for example because there can be humans or other equipment in that direction.

A ground station can have any number of such zones defined.