About a year ago I wrote a small script that tries to find downlinked chunks of images in JPEG2000 format from a satellite called PAINANI-1. In August 2020 the first images were downloaded and also forwarded by a lot of contributors into SatNOGS-DB. A hint from a contributor of the original team around the satellite gave some hints on how images are downloaded from the satellite. If the satellite was commanded to make an image, the image itself and a, much lower in resolution, thumbnail is store…

I was unable to find any observations with a large amount of packets on this satellite that would indicate the presence of an image. Is it still transmitting images? What about over North America? Has anyone actually received this?

Hello, I haven’t either… The only thing I’ve received from PAININI-1 was Source call sign “SPACE” and Destination call sign “EARTH”… Sense of humor at least 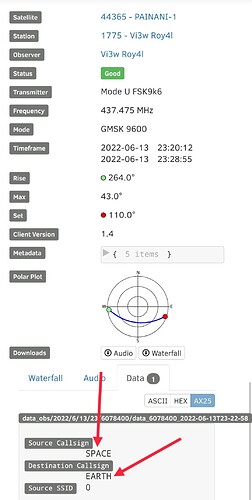