Also interesting is, that AALTO-1 was also received on the correct frequency at the same time: SatNOGS Network - Observation 4986944

@fredy This reminds me of the mystery signal we have seen from DhabiSat. That was 189 kHz off, this feels like a similar offset. Weird.

The 1513utc pass of Object #49404 had a max elevation of 83° over the Eastern U.S. Unfortunately, nothing seen. An LNA-equipped omni antenna was used, so pointing to the track of some particular object was not an issue. 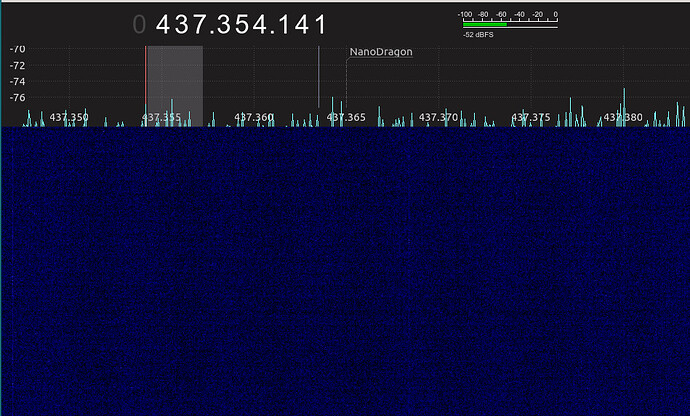 Thanks everyone for all the support.
We were hoping with not so much confidence because the center frequency was quite far shifted.
At 3:00 UTC Sunday, Nov 14, 2021 the satellite system will automatically reset, so hopefully it would change something. Fingers crossed!

The TLE sets from spacetrack.org are still to be assigned, so no identifications. These are the current fits:

Got something on NanoDragon frequency. Again, not sure what it is.

Jonathan McDowell has done some analysis for this launch guessing another OBJECT for NanoDragon:

@planet4589
@ISAS_JAXA_EN Based on those tentative IDs and extrapolating wildly using the known satellite deployment order, I guess the following, for which "tentative" would be too strong a word:

Thanks for letting us know, but in observation SatNOGS Network - Observation 5001681
this still look like Facsat-1 unfortunately.
And some just pointed out that NanoDragon would be Object G, so let’s hope!

40° pass over U.S. East Coast just ended & unfortunately nothing seen in the area of 437.365 during transit of Object-K, Object-G, or anywhere else along that train of satellites.

Indeed - BIRDS4 CW and BISONSAT 9K6 FSK close by during this pass over FN41iq. 87E 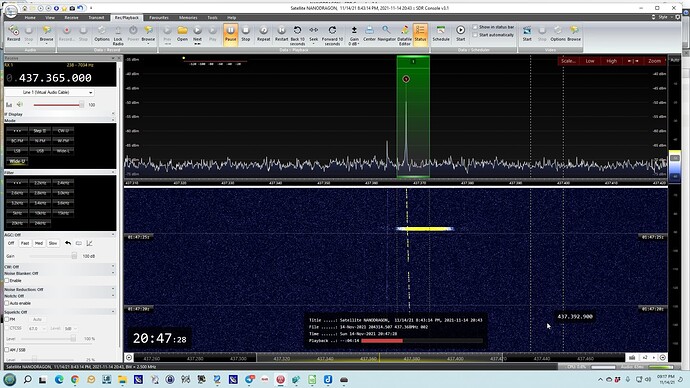 The TLE sets from spacetrack.org are now assigned, these are the identifications so far:

Dear all,
Thanks for the support during the past week.
I have a question (and a favour) to ask.
We assume the UHF antenna was not deployed successfully so the plan now is sending command to get telemetry from S-band, though the chance does not seem high because the satellite might be still stumbling, spinning, whatsoever. Do you think should it work?
And in the case we could provide you the encoded, scrambled, modulated command message, could you be able to send it to the satellite via VHF uplink, and then listen on S-band downlink?
Lots of thank from NanoDragon team!

Very glad to assist if you’d like to email me at scott23192@gmail.com

I do have VHF uplink & a very modest S-Band downlink (with AZ/EL tracking) capability.

I have also send a ping towards PI9CAM,

I am no sure if they can assist but they have helped CUBESAT teams in the past and the old lady (25 meter dish) has good ears.

Thanks for all the effort to support the NanoDragon team. We just saw on celestrak that Object G now has changed to DRUMS. Still don’t know which object is actually our NanoDragon

I’ve just changed the TLE we follow for NanoDragon to OBJECT D(49393).

Thanks for the update, looking at the orbits from all satellites launched by the Epsilon rocket, what would you propose to follow now that Object G is cataloged as DRUMS. 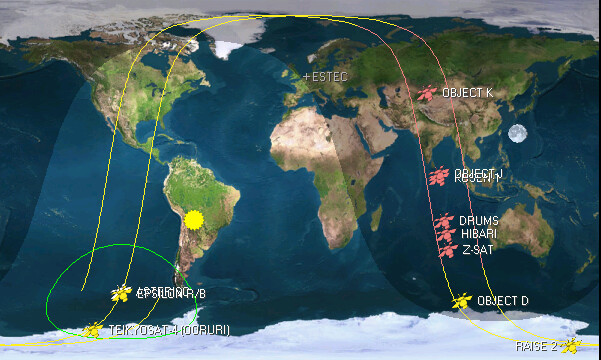 Maybe based on the release in space we can deduce a new candidate?
Object D or Object J KOSEN-1 was released together with ARICA, then we can assume (tricky) that Object J is ARICA.

Maybe we should track Object K

That is strange, given this diagram and table: 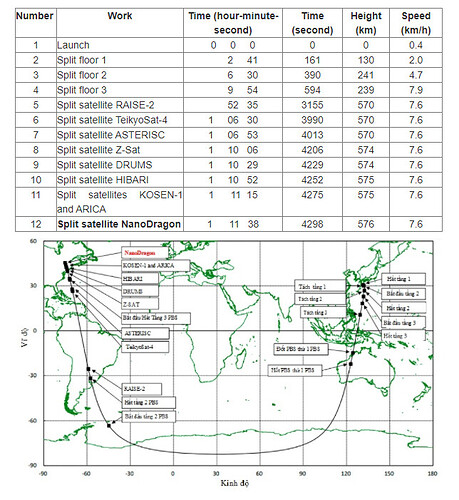 There should be 9 satellites, so from the 11 objects in spacetrack, 2 belong to the rocket or there is a secret satellite. The one, OBJECT L, is for sure part of the rocket body.

So, given the deployment order, and if it has been followed as in the table above, then I doubt for some of the identifications. This is one of the reasons we need open data on how the objects are identified. @NanoDragon any chance you have, maybe through communication with other teams, proof/data for the identifications of ASTERISC, RAISE 2, HIBARI and DRUMS?

Maybe we should track Object K

This is the one we tracked when the first TLE sets came out, to be honest given the above status, probably we should track again this OBJECT K, instead of OBJECT D I selected. I’m going to change it and re-schedule observations in the next hours.

So, changed again the NORAD ID to follow for NanoDragon to OBJECT K(49404) and re-scheduled future observations.

Hi all,
Based on this information, shouldn’t NanoDragon be Object K?

The @ISAS_JAXA_EN Epsilon 5 mission was launched on Nov 9, placing 8 payloads in orbit. None identified in Space-Track yet, but they tag object K as the only one with 'large' RCS, so it is likely the post-boost stage and attached Epsilon Satellite Mounting Structure (ESMS) pic.twitter.com/fcRXTfjPBI

hm… I missed the part about the RCS size. So, with taking it into consideration. If the ASTERISC identification as OBJECT A is right and OBJECT J is ARICA, which is probably true as it follows almost the same orbit and height with OBJECT H which is KOSEN-1, then we left with OBJECT D.