I want to ask for advice about decoding satellites.
So finally I suceeded in everything I needed - but there is one more thing which seems to be quite messy for me, namely - how exactly I can receive raw frames from satellites ? Because in most of the cases, there is a software defined for different satellites which does everything …But I would like to receive just a frames and see them in wireshark (if possible) ? I know it has to do with KISS and TNC but can you tell me what exactly I need for it ? (I’m on Linux and I’m using rtl-sdr dongle). Thanks for any help ! Have a nice day/morning/evening

Joanna,
It really depends on which satellites and which transponder you are trying to decode.

I’m not sure which satellites are using a protocol that can be decoded by Wireshark and a plug-in, E.g. AX.25 (which used KISS and TNC).

I recently had a lot of fun decoding FOX1-A using FoxTelem, the Fox 1 Telemetry Analysis Tool. It takes a .wav sound file and reads it in and does all of the decoding for you.

Here are some screenshots on what using FoxTelem looks like…

When you bring-up the tool it looks like this: 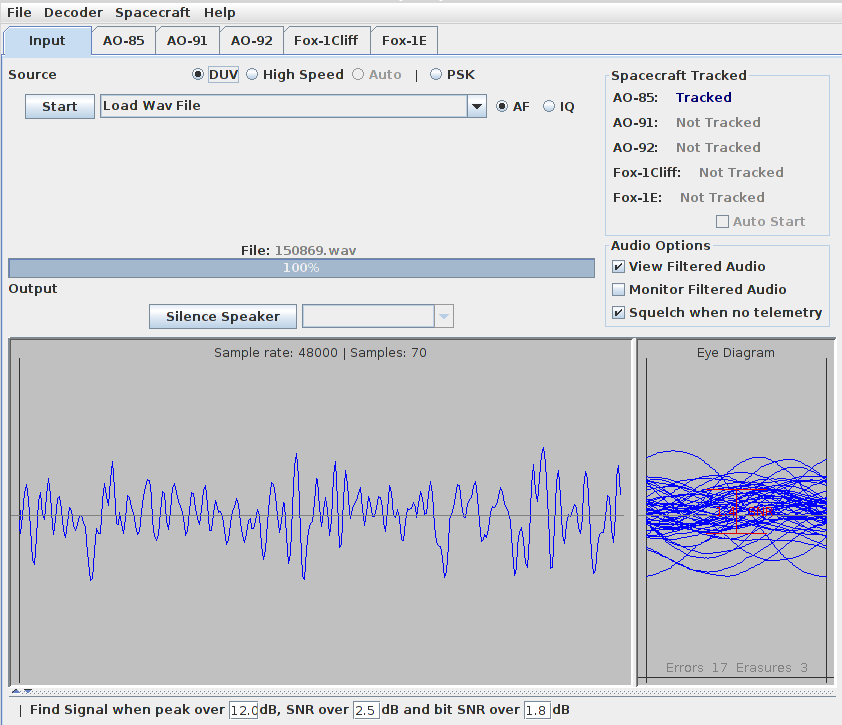 Once your audio file has been processed, you can click on the tab that corresponds to the Satellite you are trying to decode. Fox 1-A is AO-85. The first sub-tab is Health. 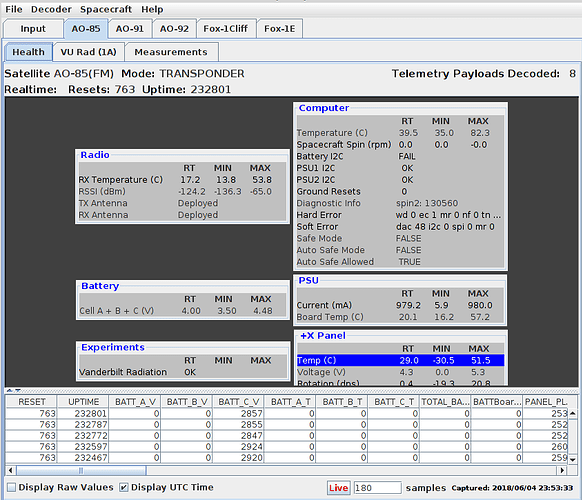 Then you can click on the second sub-tab and see if anything decoded for the Vanderbilt University Radiation Experiments. 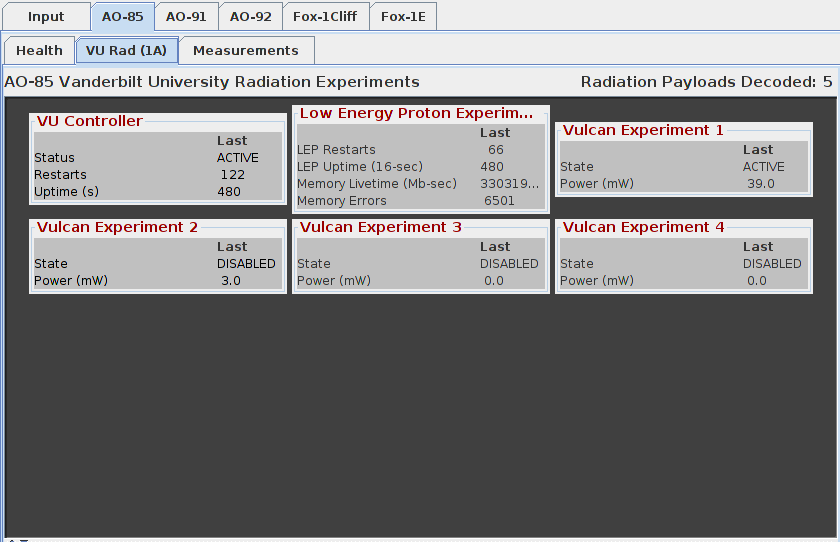 Then, if you click on the third sub-tab, you can see measurements that were captured at the Ground Stattion. In my dataset, there was nothing. 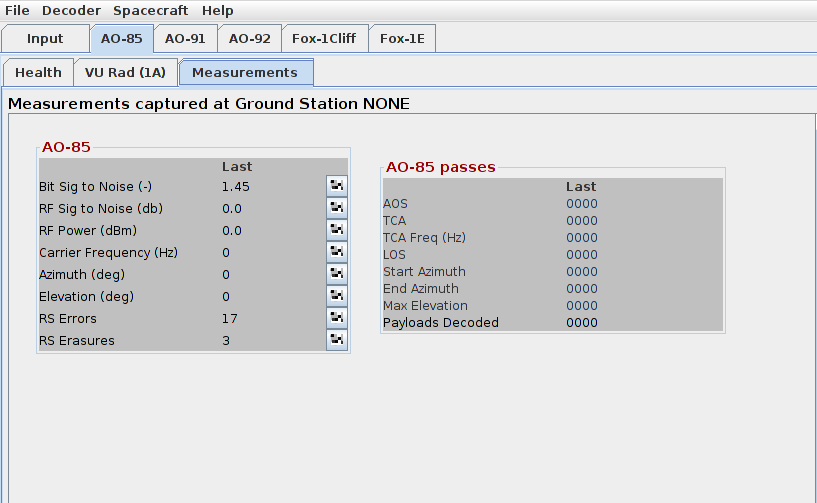 I will try to find a place for this overview and where to go.

I do know that ISS does use AX.25 packet format for it APRS transponder, but I’m not sure about their telemetry.

@Joanna By the way, here’s my report on the observation above and the discussion that’s been ongoing:

Then you have to know the modulation type of the signal – FSK, PSK, BPSK, GMSK, QPSK, DUV (Data Under Voice), etc and have quadrature decoders for them. The output is brinary data. This you can feed into a file and perhaps use a tool like WireShark to interpret (find the preamble, sync, data bits, checksums, etc.) I don’t know if Wireshark is smart enough to do things like FEC, unscrambling, trellis decoding, etc.

Your RTL-SDR receives signals and converts them to a 48Kbps audio stream like a sound card. That recorded sound file/stream needs to be decoded into the raw frames that you are talking about. SatNOGS provides quite a few of these decoders that result in the raw data.

I’m familiar with WireShark. It tends to capture data at layers above the PHY and decodes the protocols. It would be interesting to have a software block in GRC (Gnu Radio Companion) that produced files that WireShark can read. This way, the raw data out of a data decoder could be fed into this block and now you can run a WireShark trace on your RTL-SDR.

Oh yeah that will be really great ! I’m not familiar for now with GRC but yeah it sounds really great

If you have an RTL-SDR, you might want to try taking Michael Ossmann’s online beginner course “Software Defined Radio with HackRF” and use your RTL-SDR to do some of the experiments. He’s of course trying to sell his more advanced SDR, the HackRF, but it’s by no means a sales pitch. But the point of all of this is that you can learn how to use GNU Radio Companion (GRC) on a number or SDRs. In the beginning of the course, he shows you how to make a dongle with Linux on it. When you boot with that dongle installed, your laptop temporarily becomes a Linux machine with GRC pre-installed on it. Alternatively, if you have a Linux Mint or Unbuntu laptop, you can install CRC and run it nicely with your RTL-SDR.

Once you get how GRC works, you can build decoders for various signals (or find them online). Now here’s the prize you were looking for: RFTap.

RFTap: A Bridge Between GNURadio and Wireshark

Recently a new Linux based tool called RFTap has been released. RFTap acts as a bridge between GNURadio flow graphs and Wireshark. GNU Radio is a visual based programming environment for digital signal processing applications, such as RF signal...

Incidentally, SatNOGS uses GRC in its Sever decode processing. Here are the names of theGRC modules it uses:

Oh wow thanks ! Im sure i will take a look onto that but for now im doing some other stuff in my project but i will come back to grc after

so thanks for that again

Its really useful for me

You might like Michael Ossman’s tutorial. He’s down to earth and makes it really simple for a beginner to get an idea of what SDR is all about. He skips all of the typical math nonsense that professors tend to get into. Finish the whole thing. You will need what he’s giving you. If you know it, skip ahead, but be aware that you are able to get a refresher if you need.

Once you have that done, find some of these open source decoders. They’re plug-ins for GRC. Then when you have that going, find the RFTap bridge and begin using Wireshark on what you receive.

I know it’s a big long project ahead of you. Stick with it and take baby steps. You will learn a lot from it. If you jump too far ahead, you will be trying out for black belt before you’ve done the white belt if you get my metaphod.

I ended up buying a HackRF. It’s much more inexpensive than an Ettus Research B210 and can demonstrate all of the concepts just as well.