Would like to offer an offline client for the SatNOGS Network w/ 3D orbit visualization to the SatNOGS Community if anyone had use for it :)

during a university thesis, I have developed an “offline” client for the SatNOGS Network w/ 3D orbit visualization, pass and eclipse prediction, and integration for Kaitai Struct for the university satellite SOMP 2b. Since it was a great effort, I would like to share and provide it to anybody who might have a use for it. It would be sad if the tool would just end up in a drawer at my university.

Currently, it is in a usable state but would I would like to expand it if it is of anyones use. 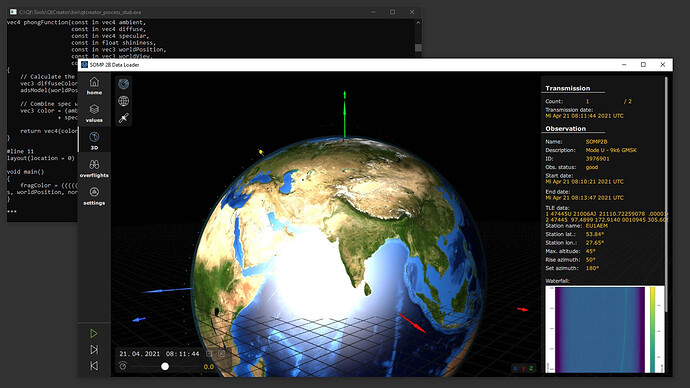 It is based on C++ and Qt and completely open-source to use! Its features:

The tool can be downloaded (already compiled for windows) under my GitHub page https://github.com/Olgidos/SOMPviewer.

I am currently working on the written form of my thesis. A provisional version lays in the GitHub as well

Can you port it to GNU/Linux?

Basically, it should be no problem. The only thing is that the NASA NAIF SPICE framework needs to be recompiled.
Sadly, I have less experience building applications for Linux. The MSVC compiler logically won’t work I guess. But MinGW probably works. I will try to check it out in the following week.

Cant find the pre-compiled for Windows, Is it There?, Want to give it a try

At https://github.com/Olgidos/SOMPviewer look on the right side under “Releases”. There you can download an archive containing the .exe.

If you cant find it here a link: https://github.com/Olgidos/SOMPviewer/releases