As some of you might have already noticed there is an upcoming ARRIS contact next Monday 13:48:27 UTC.
The contact will be shared between the Hohenstaufen-Gymnasium Kaiserslautern in Rhineland-Palatinate, Germany with the help of the folks from DL0XK and the Matthes-Enderlein-Gymnasium Zwönitz in Saxony, where DLØMEG will be responsible for the HAM radio side of things.

The contact will be mostly in German.
Questions will be asked alternating from both stations, starting with Kaiserslautern as the ISS will appear over the horizon in the west and then move eastward.
Each station will get to ask two questions before the other station takes over.
The coordination between the stations will be done via telephone, as they are to far away from other to listen in on the uplink.

There will be a live stream from Kaiserlautern,
which will have one half of the questions and hopefully most of the answers,
as well as camera showing students operating the transmitter.
The stream will be available on the schools youtube channel. 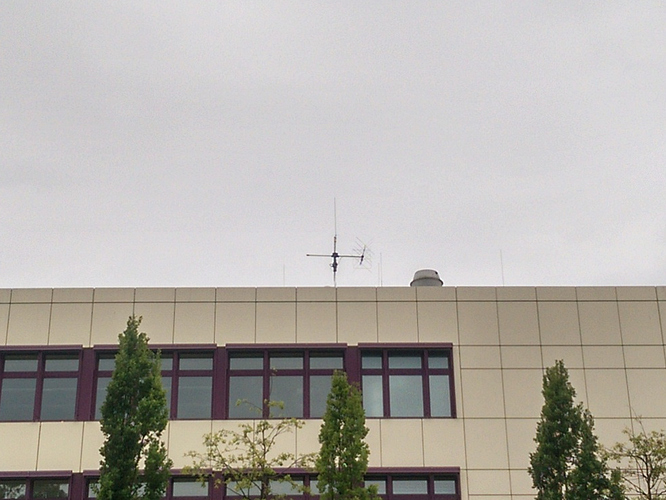 This post is only based on my personal observations, while standing next to the transceiver, and by no means an official statement by the Hohenstaufen-Gymnasium Kaiserslautern or DL0XK.

As some of you may have noticed the contact failed.

In contrast to what some german HAMs are spreading on social media, this was not the fault of the school or amateur radio operators supporting them.

Here’s what has happened today:
After a couple of dry runs on free frequencies, with one of us answering questions from a handheld transceiver pretending to be on the ISS we were confident that the contact would work smoothly.

If you want you can listen to the full downlink, put together from observations by the ground stations of F6KKR(JN08vp), DL4PD (JO30cr) und OM1LD (JN88qa) which should cover the entire pass.
I’ll point out timecodes for the important events throughout this post.

Alternatively you can watch the recorded livestream which includes the uplink: https://youtu.be/TVLniwW1QRw?t=3687
(For which I do not have timecodes at hand.)

We started calling when the ISS was barely above our horizon, trying to establish contact as early as possible to get the all the questions into the short time frame.
The first thing we heard was ‘I copy you loud and clear’ (1:00) so we immediately followed up the first question, which didn’t get through.
We quickly noted that DP0ISS was calling DN2DLR, which at that point did not make sense to us.
Since the contact was shared between two schools some confusion about the correct call-sign was to be expected.
Only much later after a mention of the DLR lab in Braunschweig it dawned that there might have been schedule mixup.

What then followed was wild channel switching. (around 4:00)
Each ARISS contact is assigned two ‘secret’ uplink frequencies.
‘Secret’ as in you are not supposed to tell them to anyone, so no one else can interfere with your contact.
So we (and DP0ISS as well) switched from primary to backup uplink and back without success.
What we didn’t know back then was that our primary uplink was the secondary for DN2DLR and vice versa.
This interesting fun fact was revealed later after we managed to get in touch with somebody at DN2DLR via phone.
More by chance we ended up on the on the same frequency again and after a confirmation we tried to ask the first question again, but another call for DN2DLR as answer.
We replied as DL0XK and the reaction was another a call for DN2DLR.
The polite way of telling a station to get the f… of this frequency.

The student who was at the mic at that time handled the situation like a pro:
He calmly repeat our call-sign and explained that ‘This is Kaiserslautern, not Braunschweig. Over.’
As a response we got ‘DPISS copies. I understand, my contact info nervous laugh calls for DN2DLR. Over.’ (8:10)

At that point the pass was almost over and it was clear that DP0ISS was not going to deviate from his schedule to talk to us.
Which makes perfect sense, since for all he knew we could have been some mischievous HAM who guessed the uplink frequencies and tried to to hijack the contact.

At some point we got a ‘second calling station, go ahead’ (8:50) it is not totally clear at the moment if that was directed at us (DN2DLR being the first, and DL0XK being second) or if the school at Zwönitz tried to call DP0ISS as well.

Much later we got a confirmation that there has indeed been a schedule mix up between today’s and tomorrow’s contacts at some point.

At second attempt will be schedule as soon as possible.