This post is supposed to be a proposal for a way forward towards more auto-scheduling functionality in our Network. This is building on top of the existing general discussion.

I believe that regardless of the decision around the auto-scheduling actor (client? network? stand-alone service?) the above mentioned steps can be reused and are impactful. This is supposed to be a gradual work-in-progress vs sudden system-wide change. Please provide feedback and let’s keep the work going!

Currently, the auto-scheduler computes passes for all transmitters that fall within the frequency range of the antennas of the ground station. Each pass is then given a priority (from 0.0 to 1.0) based on two properties:

These priority factors are multiplied and all passes are then sorted on this total factor. The scheduler will pick the pass with the highest priority, and then go down the sorted list and schedule subsequent passes which do not overlap with any of the previously scheduled (or marked to be scheduled) passes.

This approach works well but has the disadvantage that for a satellite with multiple transmitters the scheduler will always use the transmitter with the highest success rate.

I’d be interested in ideas how to improve on these situations.

Can priority be manually defined? For example, if I want ALL ISS voice passes observed, can I manually tell the autoscheduler that even an 11° ISS Voice pass takes precedent over an 89° AO-92 DUV pass?

Can priority be manually defined? For example, if I want ALL ISS voice passes observed, can I manually tell the autoscheduler that even an 11° ISS Voice pass takes precedent over an 89° AO-92 DUV pass?

I plan to implement functionality to have a user defined “must monitor” list (as @pierros mentioned in the proposed concept post), so you could add your preferred transmitters to that list.

A few points of note though:

I would think along with the must monitor list there would be a priority number that says which has priority during such problems in number 2.

I would think along with the must monitor list there would be a priority number that says which has priority during such problems in number 2.

This is exactly what I would want. For example, I would want VHF priority of the following:

Etc. The problem with overlapping observations is no problem

So, maybe the priority should be set to transmitters and not in satellites.

Doesn’t selection of transmitter automatically give you the satellite?

Yes, each transmitter has a unique identifier and belongs to only one satellite.

Thanks for your input. I’ve added an issue on this and will try to implement this soon. It’s probably also useful to add a black list option as satellites like Fox-1A and UKUBE have very high success rates, and hence will get high priority, but we know they’re no longer operational.

Instead of priority, I can also think of a system based on points. An example:
Input Parameters:

The score can be calculated with:

The passes with the highest positive score get scheduled.

who or what is going to vet the sats that auto schedule?

I would assume either the system fir things like NOAA and FSK ones that decode and then the station owners who API Key would be the one requesting the observation.

If the station owners are required to vet passes that are auto scheduled, don;t you think that satnogs will lose a lot of ground stations? Most gs owners have better things to do than vet passes that they are not interested. 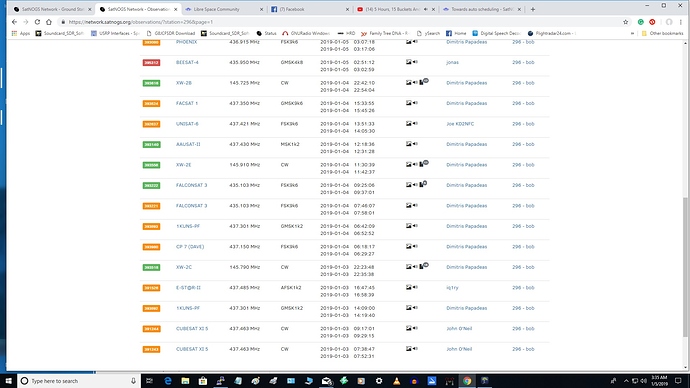 As you can see, Most people are slow with vetting the sat passes that they manually schedule. Imagine that they will not vet passes they did not schedule.

hm well it’s easy and simple to vet passes. Plus I normally go thru my stations observations week or so and vet all the unvented ones. Not hard at all.

Also you could just say to not use the auto scheduler on your station. (Utilization of 0)

In the current design, the auto-scheduler is ran by the ground station users, primarily to reduce their workload in scheduling passes that they are interested in. As with manual scheduling, they’d be the ones vetting the observations. You’ll be free to set your station utilization percentage to a low value.

In the future the goal is to use machine learning to vet observations, reducing the human workload even further. Or even better, have all observations automatically decode data.

I like the proposals. I don’t mind vetting others observations, either - provided they fall into a reasonable workload (and I assuming that the utilization setting will help station owners fine-tune their workload).

The only concern about non-station owners auto scheduling observations that are expected to be vetted by the station owner is that sometimes the station owner will not be familiar with the “signature” of the transmitter. So, for example, the observation of a Fox satellite could mistakenly be vetted as good by somebody observing CAS telemetry or CW in the waterfall.

Not a huge deal, but a concern nonetheless.

This new feature is bound to be my favorite aspect of the network. Can’t wait!