The recent launched Nauka module appears to be transmitting on 631Mhz. See:

Anyone interested in observing? Then it should be added to the database.

I would be interested in observing it too, would be great if it could be added soon, so we can use the time while it is still in transit!

Nauka module has been added into DB and it is available for scheduling in Network. Thanks for heads-up.

Thanks! I have just setup the RTL-SDR V-dipole kit antenna to 631 MHz, and scheduled a few observations. I am curious if it will work…

I also saw a 166 Mhz transmitter listed, is this a known source? Or a mistake?

Thanks for adding this!

I also saw a 166 Mhz transmitter listed, is this a known source? Or a mistake?

It is coming from:

I recorded this signal at 166.075 MHz at the beginning of the last Nauka pass, first episode one minute early though. No evidence that it actually is Nauka. 166 MHz is a known Soyuz/Progress telemetry frequency.

sent in #satnogs channel in matrix by kovirii. From the twitter thread seems almost sure that belongs to Nauka.

Super. I scheduled a few observations on other stations. Let’s see. Thanks!

I see something in the last part of the observation. The doppler appears to be off, but Nauka is known te be manoeuvring.

Passive radio tracking of the #Nauka spacecraft confirms that orbit raising continues. Doppler curves from 16:40 and 22:56UTC show it was late by 111 and 655 seconds respectively compared to the last @SpaceTrackOrg orbital elements from July 24, 04:55UTC.
1 Like
EelkeVisser July 25, 2021, 7:34pm #9 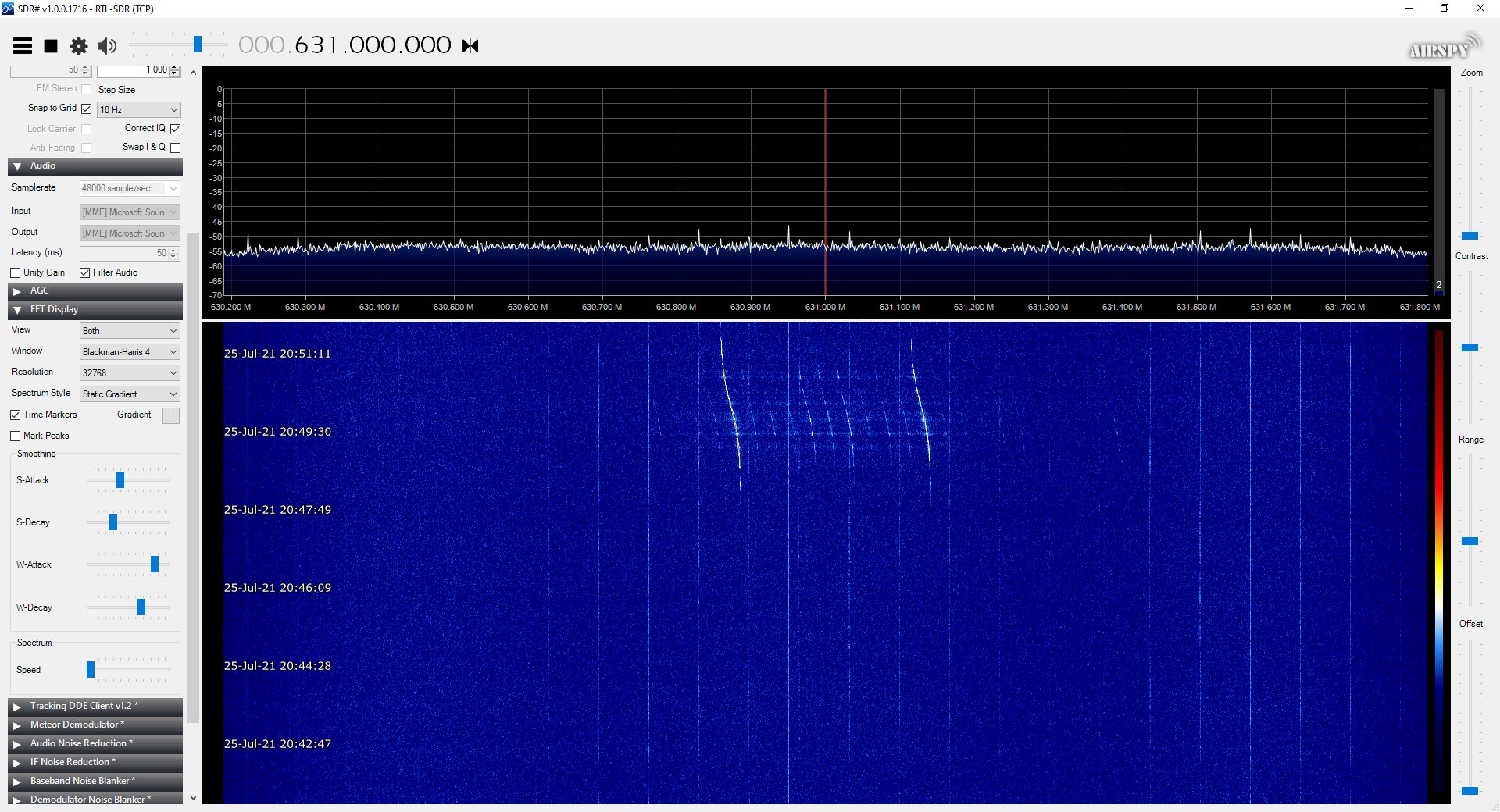 I did not use Satnogs, because the bandwidth setting for the transmitter is to low. On the next pass I try Satnogs again.

To confirm, my UHF turnstile of SatNOGS station #40 was able to easily pick up Nauka signals at 631MHz in STRF mode. So it should be possible to receive Nauka with SatNOGS UHF stations to provide global coverage and check for manouvering.

I also received it again using my satnogs station. I had swapped the FM script with the LRPT script to get a bit more bandwidth. I did not use my 435 Mhz turnstile but the RTL-SDR V-dipole with length adapted to match with 631 MHz. I am not able to measure or tune it.

Would love to get more bandwidth and see both strong peaks on satnogs as I also saw, using the SDR# software. Anyway cheers to everyone who contributed to Satnogs!

@fredy has accepted the brighter sidebands at 631.129MHz and 630.873MHz as transmitters as well. Feel free to target those.

Unfortunately currently the bandwidth depends fully on the mode and the baudrate is used for a transmitter entry. We still have an open issue for making the transmitter entries more detailed so we can handle several cases including ones like this one.

Unfortunately currently the bandwidth depends fully on the mode and the baudrate is used for a transmitter entry. We still have an open issue for making the transmitter entries more detailed so we can handle several cases including ones like this one.

Yes that would be helpful I guess. In the mean time I have adapted the satnogs_fm.py flowgraph a bit to get a 1 MHz wide waterfall. See:

You can see clearly both “strong sidebands” observed. The softer details in between the side bands are gone. But for a first hack, I am pretty pleased with it.

Note though that the number of channels in the waterfall will still be 1024, so your frequency resolution is limited in seeing the weaker features.

Yes, it keeps being a bit hackery… The waterfall had a lot of noise and a white band at the higher frequencies. Playing with it gave a lot of failed observations. So I started with the basic satnog_fm.py flowgraph again and increased the audio sample rate from 48k to 480kHz. The waterfall was very good. But the audio ogg file was to big to upload. I have now removed the audio generation from the flowgraph. I got:

The wide bandwidth is good for seeing both peaks, and maybe for finding other sats. But the doppler deviation is hardly visible. I also increased the amount of fft channels from 1024 to 2048, but the picture did not change.

Do somebody know from where this data come?

@pa1ejo
Complete #Nauka #ISS #proton orbit history since 21-7, it appears that they joysticked the MLM module to the ISS. Next there were unplanned thruster firings.