How should I interpret this polar plot? Am I doing something wrong?

EDIT: I now see that this is an almost eight hour long pass of a Molniya-style orbit sat. So it’s understandable if it confuses the polar plot-drawing function. But still, until you realize that, it’s a really confusing plot.

Also the rise/set azimuths don’t match the green/red points on the graph. Also the red set point is at an elevation of like 60°, i’d expect both point to be at 10° as it is what i set up my station to. 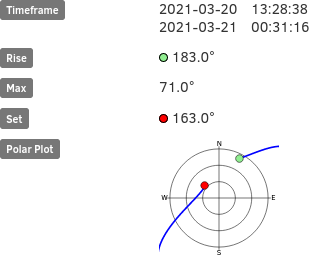 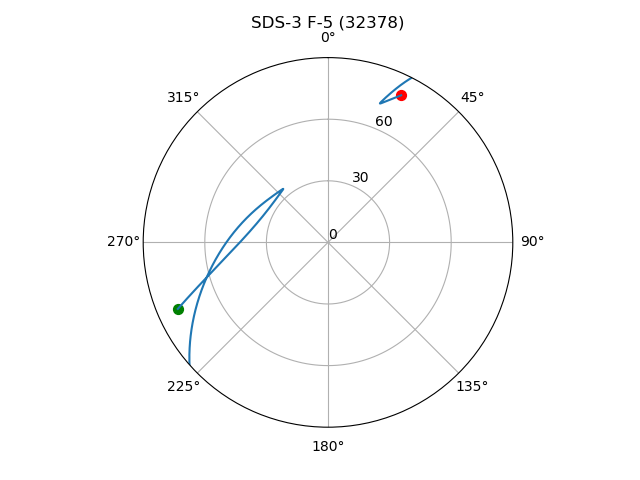 Also in my case the ‘pass’ is not between getting above and below 10° as it should. Looks more 2 passes have been combined into one by SkyField.

For other ‘classical’ orbits i get exactly the same result as the one displayed in SatNOGS.

Looks like many libs get confused with a Molniya orbit when calculating the next pass.

Parts or the SatNOGS graph seem very similar to my graph, if we take only the segment between my rise (green point) and my first apex and between when it comes back over the horizon and the 2nd apex.

With another TLE for the same satellite i get a much more coherent result, at least the pass shows the path between rising above and falling below 10° elevation: 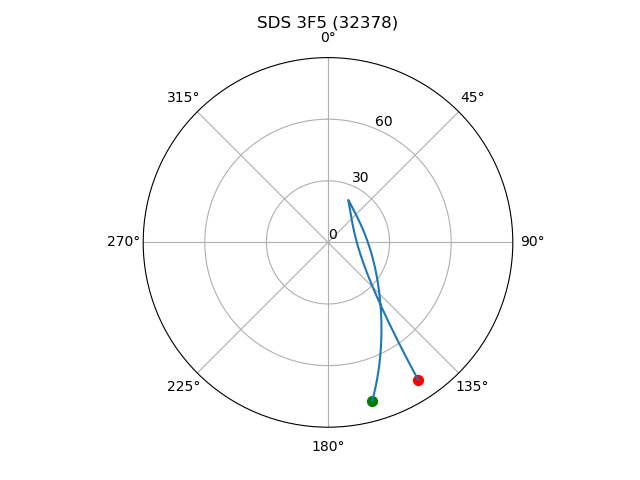 So for me the mystery is complete and i have no idea what the correct result should be. I’d expect the definition of a pass to be the part of an orbit where it is above a certain elevation, but that doesn’t look that easy for this orbit for many libs.

Interesting! The first SDS plot actually doesn’t show one pass - it’s actually two. If you can call that a “pass” at all.

I hadn’t heard of SkyField before, and now I’m not going to bed tonight at all! Thanks