There will be several satellites. We try to gather info and keep track of them in https://docs.google.com/spreadsheets/d/18ul_K-muGQoMvoJyCrl9wAGXDbz5mvCblKMxAdPgCdU/ any help is appreciated, so we can try to add satellite in DB and manage to observe them using Network.

The deployment has been delayed for Monday 28th

Launch has been moved for 29th.

Stopped at -10s… it goes for tomorrow.

Satellites that have been added in DB:

As some of the satellites are and will be for sometime in deployers we don’t expect the first scheduled passes to have results.

Bellow are the TLE sets from Celestrak moved to the new Launch time:

EDIT: TLE from Celestrak can be found in https://celestrak.com/NORAD/elements/supplemental/transporter-2.txt but have in mind that the content of this link is updated.

Nothing heard from the other satellite which is kind of expected as it is very possible that they haven’t been deployed from their deployers.

@M0GSN could the signal in this observation be Faraday Phoenix?

It seems to fit OBJECT AX(48924) but we haven’t anything similar in other observations.

TUBIN has been identified, it is OBJECT X(48900), bellow is screenshot from @pierros analysis with strf tools: 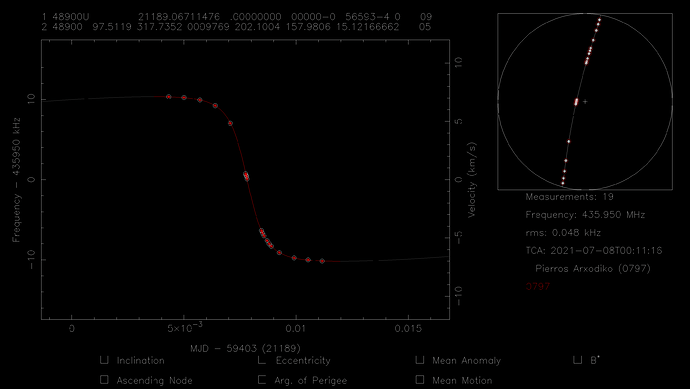 According to this tweet, that I missed, ION payloads are not going to be deployed for some days

Still celebrating the launch of Neptuno, our first satellite completely dedicated to #maritimesurveillance The satellite is still inside @D_Orbit ION Space Tug, and separation is scheduled in 2 weeks. More information 👇 https://t.co/dDNNiIaaZY

So, Neptuno, Sparta, QMR-KWT, NAPA-2 are not expected to be received. On Neptuno and NAPA-2 frequency we have received something which seems to be from this launch, I’m going to analyze it over the weekend and probably I’m going to create an unknown satellite to track this signal. For ION deployer and the satellite inside it we follow now OBJECT AK(48912) which the best fit to the last reception of ION deployer some days ago.

PAINANI-2 isn’t received, but I’m not sure yet if Sherpa-FX2 payload has been deployed. On the other hand Aurora and Tenzing in Sherpa-LTE1 seems that have been deployed and follow either OBJECT BQ(48941) or OBJECT CA(48951) but still we don’t know who is who and if indeed the signals belong to these satellites for sure.

An update from QMR-KWT, we haven’t received since 2021-07-19, however the signals back then seems to fit one of the 4 new TLE sets that spacetrack has published, specifically the OBJECT CM(48962). I’ve changed QMR-KWT to follow this TLE set in DB and Network and scheduled some observations in order to verify and identify it, if we manage to get any signal.