I have been experimenting with demodulating the “funny pattern” from TRANSIT 5B-5 using USB mode. I was expecting some sort of slow, multi-tone FSK and indeed it appears to be so.

Edit: Listen to the excerpt on soundcloud. A barrel organ (also called roller organ or crank organ) is a mechanical musical instrument consisting of bellows and one or more ranks of pipes housed in a case, usually of wood, and often highly decorated. The basic principle is the same as a traditional pipe organ, but rather than being played by an organist, the barrel organ is activated either by a person turning a crank, or by clockwork driven by weights or springs. The pieces of music are encoded onto wooden barrels (or cylinders), which a...

I like the sound of TRANSIT 5B-5, it sounds so antiquated,
no wonder, it was launched 1964 and probably it is
the oldest, transmitting satellite in space.
I wonder if the signals are nonsense or decodable data?
Maybe telemetry.

I wonder if the signals are nonsense or decodable data?
Maybe telemetry.

I also thought it was telemetry but it seems to be repeating the same pattern. So I am wondering whether it is just some frequency pattern used as signal source for some measurements.

The best pass so far with many minutes of good audio

I plugged it into sound visualiser and it shows a regular 1216Hz tone that seems to be a marker of some description and the majority along a 870Hz carrier (or some term like that). I’ve not used this software before but it makes it easy to see whats going on. 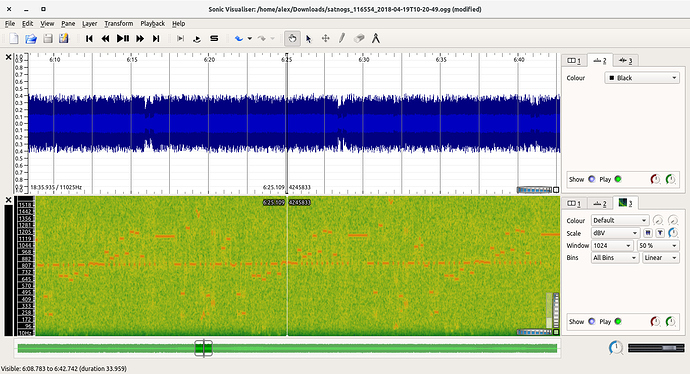 Edit…This shows it a bit better

SOOOO who want to try and decode that now xD I might try for fun.

Well, according to that link the signal is telemetry. Note that the actual audio frequency in my audio recording is arbitrary, as I am using USB demodulation and just tune to have the tones within the audio passband. As we can see in the IF spectrum, there are more sidebands to consider.

Cool! Thanks for posting this info