Hi Michel and Bob,
First, thanks a lot for your interest !
This is another photo of the rotator in construction (not completly finished) (2 block bearing are missing to “fix” the top of the axis of the worm gear) 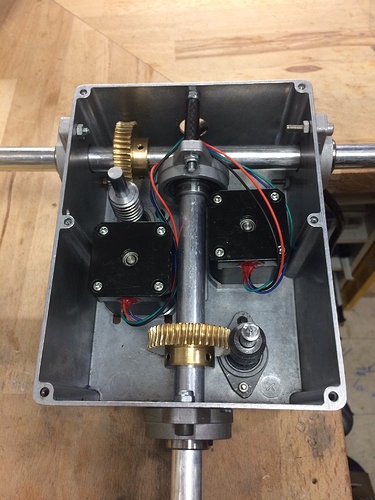 Bob i will send you today some CAD file, 2D datasheet and more information
Michel if you are also interested for the CAD file and the technical information you can give me your email adress or contact me at hadji.yohan@gmail.com
Michel si tu est aussi intéressé tu peut soit me donner ton adresse email ou bien me contacter à cette adresse : hadji.yohan@gmail.com

Welcome to the community and thanks for sharing your project.

I would suggest you open a repository (maybe in gitlab) and upload there the CAD file(s) and any other info someone needs to build this rotator.

With the repo and with a suitable license (we use CERN Open Hardware Licence v1.2 for Libre Space projects), you will be able to share properly your project, keep track of the changes and the progress and let others easily give feedback, open issues and contributing to your project.

If you need any help with either git or the license, don’t hesitate to ask. Also you can find most of us online in SatNOGS chatting rooms.

Hi Yohan
From the two photos you posted, it looks like the drive from the stepper motors to the worm drive shafts is outside the box via a couple of belts.
How are these belts and pulleys protected from the elements, snow and ice in your case. UV radiation in our case? (Australia)

How are you driving the stepper motors?
Where is the tracking information coming from?
How are you providing antenna position feedback to the tracking controller?
Mine use the LSM303DLHC e-Compass 3-Axis Magnetometer and 3-Axis Accelerometer Module.
Cheers Bob

Hi bob,
You are right the belt are outside, but this is only for the “test & devellopement”, like that this for me more simple to move manually the rotor when he is not powered, in the final version the working would be exacly the same but with the timing pulley and the belt inside the box

For this time I drive the stepper motor with a Arduino Stepper motor driver shield, but it would also be possible to control it with the official satnogs controller pcb

You can controll it with the satnogs soft or with Grpredict in direct, like @quartapound done some time ago
For this time i’m thinking to 2 posibilities, the first is to use stepper motor with encoders and the second is to add like you said a 6 or 9 axis sensor to the head of the antenna connection
This project isn’t finished yet and for this reason all your wish or idea are welcomed !

Hey! Nice work! Could you please share the part numbers of worm gear and work wheel?

Hi all,
Thanks to @fredy suggestion and in front of the number of ask for CAD or information (by email or on Satnogs), i’m thinking to open a repository to upload all the files and the information, it could take some time (1 week or more) but it would be more simple in the futur to post update ect…
This for this reason that @vk2byf i didn’t yet emailed yet but stay tuned i will do the best the make it as soon as possible !
@azisi This parts are from special order on aliexpress (about 10$/pcs), all the part number and prices ect will be in a document that i’m actually writing and will be posted on the future github repository !
Thanks one more time for your interest
Yohan

Hey @Yohan_Hadji!! If you need any help with repository and documentation let us know.

Hi again,
My repo is online with the first files at : https://github.com/YohanHadji/Yohan-s-Rotator- !
The next files are coming soon with test of the cnc parts during the week
Best regards !
Yohan 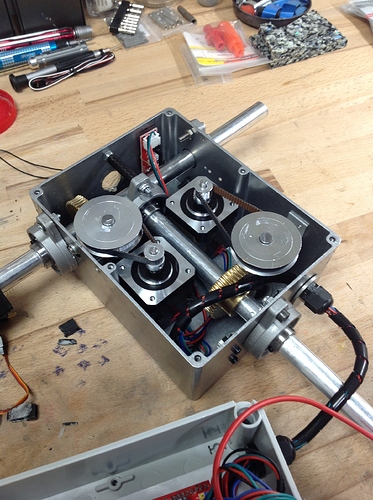 Today first observation !!
But some issue… I was thinking that my Raspi 1 could support satnogs task but apparently this is not the case

My station is this one : SatNOGS Network - Ground Station SuperAntennaz - Rotator
For those who wonder, it’s a pun in French (Antennazz = “ah, t’est naz” = which means “you’re wrong or bad”)

Hi !
After a week of “real life” test i made some modification and the V2 is available, this one will work better
1/ the stepper, and the worm rod are now the same piece, like that the belt tension is always the same, this wasn’t the case on the V1,
2/ the timing pulley is now 40t, the 60t was overkilled and a bit to big

Files are available on the repo ! (the step version is zipped due to its size)

(I’m actually in discussion with a Chinese aluminium parts producer to estimate the price of the cnc parts, for an example, this would be for this time 4$ for the worm gear, the same price for the worm rod and $2-3 for the stepper-worm rod mounting part)

The rotator move and the sun shine

Antenna Upgrade ! (wimo x-quad 432mhz) obs are really better ! but it looks like 15mm fiberglass axis isn’t good enough to support all this weight…
V3 (work in progress) will be with 30mm Aluminium tube ! 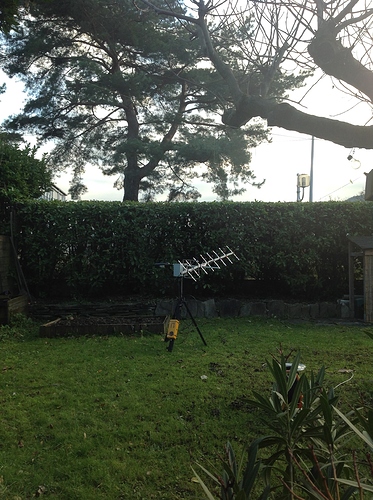 I have some questions to understand better the design:

Yep for this time the design is made to be put in a box (Hammond 1550 H i think) but in the same time i’m working on another one which work with a special box : 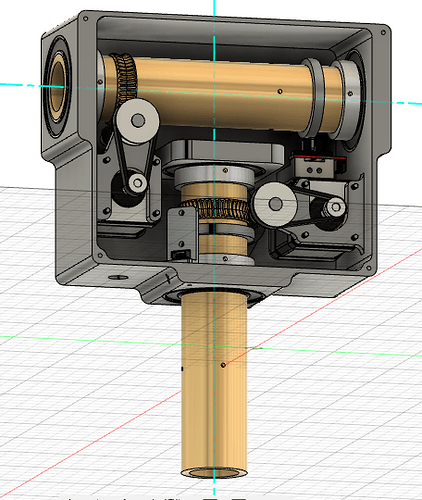 On the “market box” version, the block bearing is mounted on this part 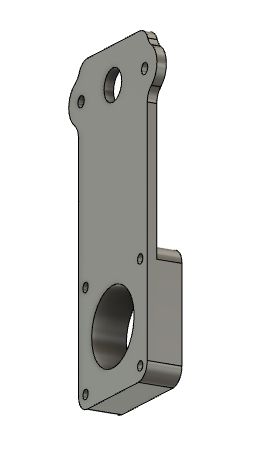 Which make the connection between the stepper and the worm rod

For the mast and for the antennas, 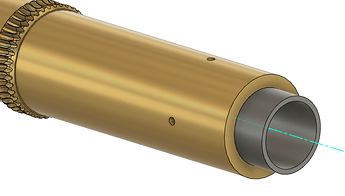 I would really like tu put encoders, i didn’t had the time to think to them, for this time i just added optical endstop in my design, but, yeah i could need some help to know how to use them !

About this different box size :

The mechanism is in 4 parts
1/ Axis/worm gear + Ball bearing for elevation
2/ Stepper + Timing pulley + Worm rod, (which is mounted in only one “solid” block

And the same for the azimuth

So basically you can mount it a bit as you want (for an example you could just mount it on a plate), the only limit is the length of the axis/worm gear (which is the same parts)

If it could help, it looks like that once mounted in a box 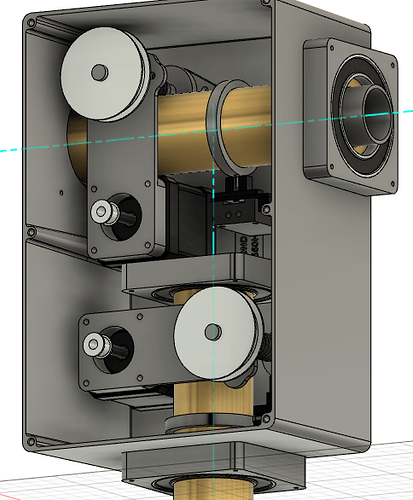