Rotor based on SARCNET idea

After my laughably naive camera AZ/EL rotator, which was barely strong enough to lift a very light uhf yagi and did little better than an omni, this next version might work, based on ideas from https://sarcnet.org/projects/project_rotator.html
using 0.6rpm gearmotors (which have enough angular velocity to track the fastest leo, altho a 360 takes a minute 40 seconds) and 6mm rods, which are still rather flexing under weight. Was inspired by the ON5NV build to use bearings and also wanted to use absolute positioning feedback instead of an accelerometer, hence the pots. Belt pulley on the pot is bigger than the shaft since the pot cannot do 360deg, so that gears it down enough to do over a full turn.

Pic of work so far, just mounted on a tripod today. 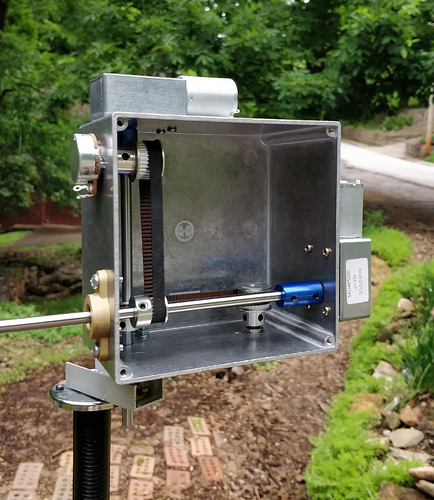 Built up enough to test with full antenna on tripod - wobbly but working. Interestingly, I heard a ham on ssb mention k3ng controller software for Arduino and decided that was a good match for this hardware - speaks Easycomm, has a plethora of config options with straightforward interface to a motor controller, signal for CW,CCW,UP,DOWN and pot inputs.