We have recently brought db up to date with python 3 and django updates will be soon as well. It is time to start thinking of a new home page that will be of more use to our users. (The current page loads all satellites which will not scale over time, nor is that very useful/necessary)

I’ve drafted this possible layout for feedback and to generate more ideas. (Emphasis on “draft”, I threw it together in a few minutes - so look past some of the rough images and such)

Looking for ideas from you all. In this draft we would adopt a 3-column layout that would be shown completely above the fold on desktop, and would collapse to 1 column on mobile. I’m open to any and all suggestions. 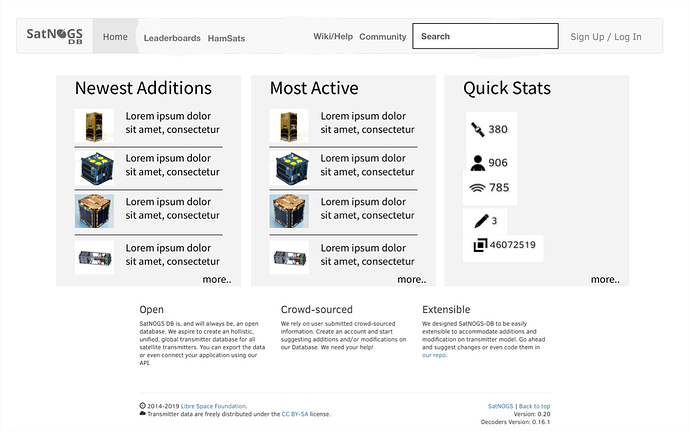 To be honest, I personally don’t use the https://db.satnogs.org/ page much.
After spending a few minutes reviewing the current page and your draft, the draft seems much cleaner and far more helpful.
If you could click on each of the ‘Quick Stats’ and get taken to them, that would be helpful as it would be a quick way to get the list of all sats if that is what you want.
I really like the ‘new’ and ‘active’ idea.

To be honest, I personally don’t use the https://db.satnogs.org/ page much.

Oh, I don’t expect many people do use it - beyond the search box I’m not sure how useful the whole listing is, hence kicking off this thread. But, I think we can make it useful

Some more insight and ideas:

There are plenty of good pages on the web that provide frequencies and modes for ham radio use. I think it is worthwhile to reinvent this wheel in db as we have a dynamic source of data, and such a page could be presented with current data from the backend (no need to update the page itself). Additionally, a specially formatted mobile and print view would be beneficial. 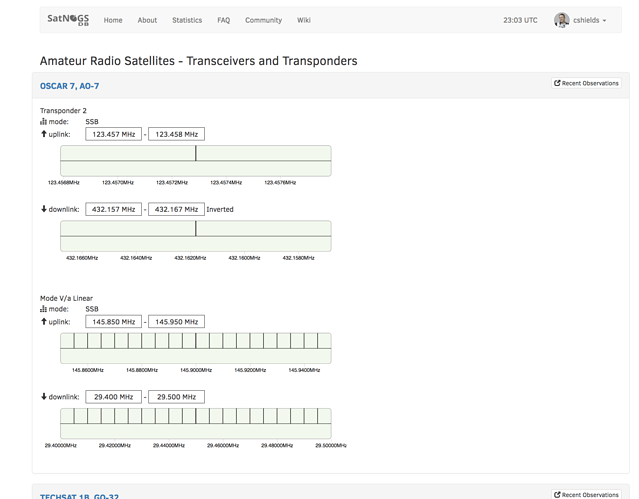 Hello, It would be great if we could search by frequency. So we could find easilly what is the name of the satellite only from the received signal. I guess...

We should offer the capability to search satellites by mode or band. For instance, searching for all satellites with an AFSK1k2 transmitter..

When I had a go at adding some text about the various sats it was a bit sporadic and the vast amount of information was either available from the NASA pages / sat wiki’s themselves / Gunter’s / N2YO .

If there is to be a bit of a change then it might be worth clarifying the extent to which we overlap with these other established sources of info. Gunters for example has a ton of stuff such as lunch site, launched with…, vehicle etc. There is also the ‘decoding’ of the TLE and other data to give orbit details .

It is a good source of info, filling in the gaps (if there are any) need not be a technical task but will need effort to ensure that data is accurate and correctly attributed.

Having said all that. It looks much better

and far more likely to be used.