Hey @remy!! This is nice!! Feel free to make a new topic in gallery for your build. Also i have one question , why are you building the v3.0.1 and not the v3.1?

@quartapound, how do you achieve the EMI shielding of rotator? The motors are producing noise. For example in v3.1 reference build we use sheet metal box.

how do you achieve the EMI shielding of rotator?

I am hoping a layer of aluminum tape on the inside of the case will achieve this. I may use copper tape instead.

I’m struggling to get the code to compile. A couple of dumb questions.

Did you use the arduino ide to compile and upload?

Did you follow the steps in the readme? I am not sure I understand them so am probably making an error somewhere

Hey! @remy which t-slot profiles did you order (lengths)? You may have a problem with the thickness of axis side part of picture. Because t-slot profiles with length 140mm fit only to v3.1.

yes I used the arduino IDE (1.8.8). …what errors are you getting? I followed the steps in the readme which directed me to getting the accelstepper library,

At 1:12, the SMB operator missed a key opportunity for infinate 1-ups.

I’ve had a few but worked through most of them. I suspect they will be as a result of the IDE rather than anything else. (Also having some issues logging into community as well)

So far I have used same version ide that is in the readme. All libraries are in. Added the SatNOGS board. If I compile / verify with SatNOGS board I get error referring to watchdog.h

The watchdog line it is struggling with is

Get same error when trying with Uno board (which it is). Board OK as have uploaded other sketches to it to check.

HI
Very good Job!
I also study a counterweight to mount on my parabolic grid antenna 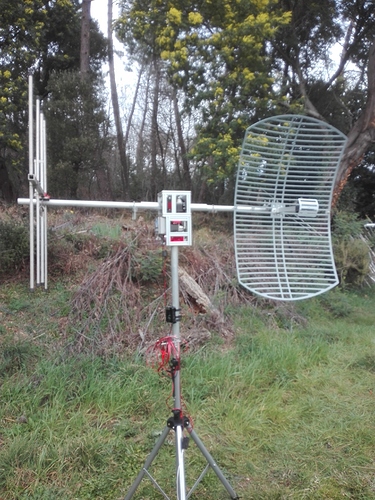 I get error referring to watchdog.h

YES! I had trouble with those lines too. I had to comment out all of the watchdog lines as well. I think it’s checking for communication between the Pi and Arduino.

just do a search for ‘wdt’ and add // before all the wdt lines and comment them out.

How I start the Rotator software on my PC:

Figure out which COM port your Arduino is (Mine is COM7)

create a .bat file in the same folder as rotctld (I found it in C:\Program Files (x86)\hamlib-w64-3.2\bin )
with the following (modify for your com port)

Start your .bat, in the top right corner of Gpredict, click down arrow, then ‘Antenna Control’

…Clicking ‘Engage’ should get the Rotator to start working. 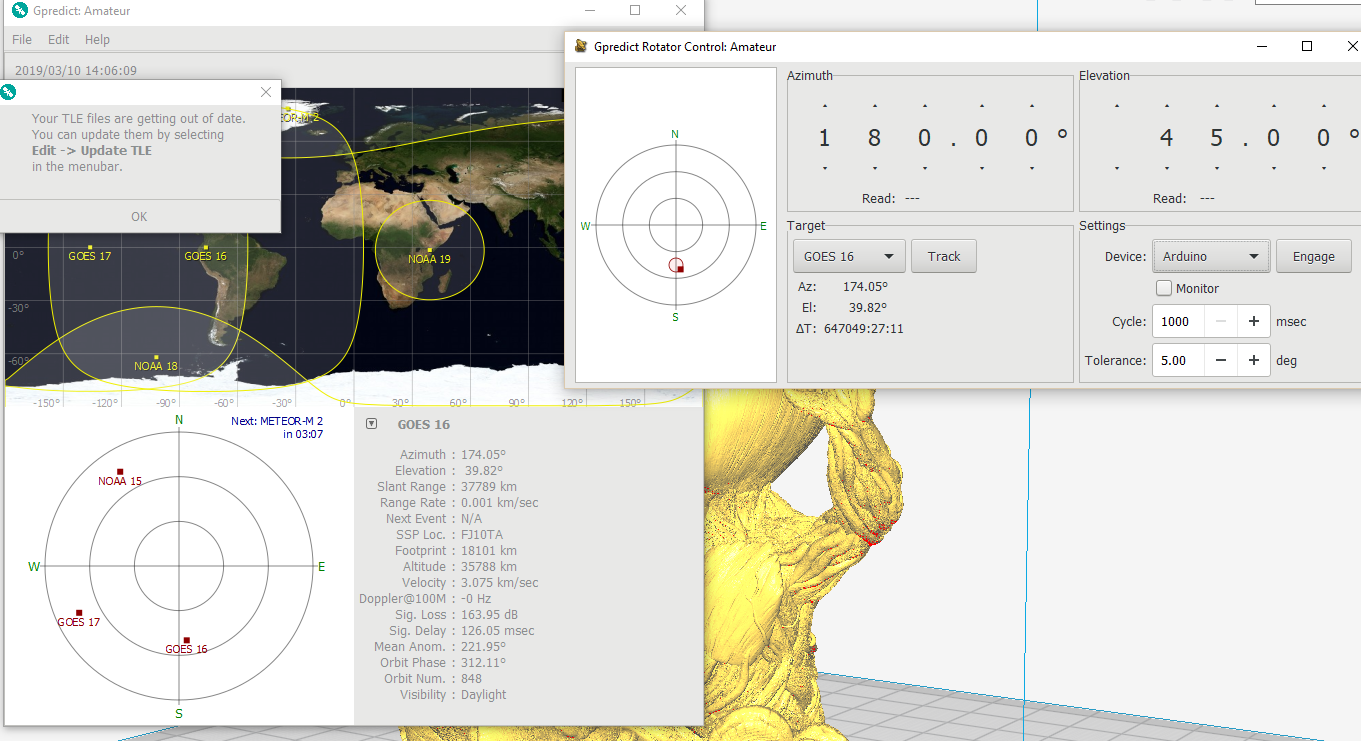 Assuming this is some kind of positional error

Are you sure the edited Easycomm.h library is being used?

see here when I was going through that, I think it was before i modified easycomm.h

okay I’ve gotten a bit further I think? … maybe you can send commands direclty from PC to arduino? I feel kinda lost but like I’m making progress. Need to wait for my stepper motors and drivers to show up tomorrow I think… I may add some serial outputs to the arduino code so that I can monitor it and debug though. I 've installed hamlib and I run * cmd /k “rotctld -m 202 -r COM3 -s 9600 -T 127.0.0.1 -t 4533 -C timeout=500 -C retry=0 -vvvvvvvv” … I can see the RX light blinking on the arduin…

Good point. We should also think of doing a wiki page. This could be a much easier / cheaper way to control the rotator.

The wiki is something I’ve wanted to do but haven’t had the time to do right…
I’m going to try and start A wiki page today. paste everything that we’ve got in this thread, links, files pics etc… It may be a bit unorganized at first but at least it’ll give us a jumping off point… and allow everyone to edit/collaborate on the wiki

I totally agree I think this may get a lot more people into building the rotator.

It drastically lowers the barrier to entry. You could put the whole thing together without touching a soldering iron. electronics can be up and running within hours.

Don’t get me wrong, I love what they’ve done (the open source custom pcb is quite impressive). It makes things SO much more complex though.

Someone will need to work on getting my CNC/Uno based unit working with the actual SatNOGS Pi microcontroller at some point though (as that’s the ultimate point of the SatNOGS project), which should be quite easy

I’ll help with the wiki etc. No problem. I’ve no idea how to deal with a fork on git (Is that the correct term?) but that seems like a good idea as well.

thats it, I think it’s all open, just create an account.

I’ve got domestic duties for the rest of the evening (and it’s getting cold in the garage) so I’ll pick it up tomorrow.