I have an FM Trap and LNA installed at my antenna and am using a RTL-SDR V3 dongle. I can enable the bias-t in Windows on other software and it works fine and I can see the increased gain from the LNA. So the hardware works.

In SatNogs on my Raspberry Pi B3+ I want to enable the bias-t on the V3 dongle using the rtl_biast program which is done via the following command: /home/pi/rtl_biast/build/src/rtl_biast -b 1

I am assuming this should be done via the pre-observation script - is that the best approach? If so, what is the correct syntax to execute that command?

If not via the pre-observation script, what would be the suggested method to do this? I am a Linux noob so go easy on me.

I recently ran into this problem also. I think the pre-observation script is the best way, although I’m new here also so someone with more experience might have a better suggestion. 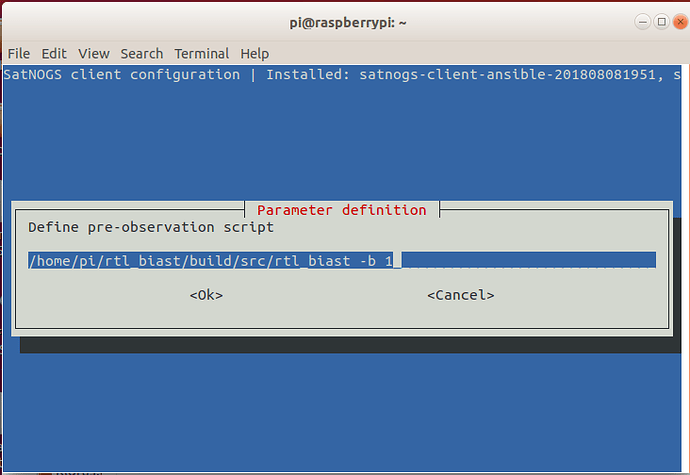 Have a great weekend!

I figured there would be more to it. I implemented that last night but gain is low on everything received so far using same settings (7.7 dB gain) that I tested to be optimal on a windows program. I have had this issue before with SatNogs client where adjusting the gain values seems to result in very weak signals despite what the gain is set to. I have to do a complete reset of the SatNogs client to get it working right again.

Using a multimeter, I did confirm that the 4.5 VDC activates when the script runs at the beginning of a pass.

Will adjust gain and try again.

Well, I took out the pre-amp because I was getting poor results with it on my SatNogs setup (Pi B3+ and RTL SDR plus VHF turnstile). Using the RTL SDR and turnstile with the pre-amp under windows it works great using a low gain setting of 7.7 to 8.7 dB.

On the SatNogs setup I tried several RF gain setting from 0 to 20+ and none worked well. All gave apparently weak signals on the waterfall. I would like the SatNogs software better if I could (or knew how to) adjust the RTL’s parameters to match what I know works when testing it on a Windows PC where I can optimize C/N.

Maybe I am missing something.

is it possible to gather some values of noise levels in dBFS from waterfalls for different settings of RF gains in order to check whether they have any actual effect?

Bumping this as I am curious if it went anywhere. I have discovered that when the device (rtl-sdr dongle) is “opened” by GQRX, it “erases” the bias-t setting. I wonder if the low gain that @W5SAT was seeing was from the same phenomena. OZ9AEC set me straight on how to fix this with GQRX, but I’m wondering if the same type of fix needs to be done for the satnogs client.

See my “rtl-sdr w/bias-t” thread for more back story, if interested.

See this reply for the root cause of the issue:

Recently tracked down the issue with why satnogs-client and activating the bias-T on the RTL-SDR blog v3 receiver works-but-doesn’t. The current version of GNU Radio that the Ansible scripts install is exactly 0.0.1 point revision older than required to support the bias-T. This is because it depends on a version of gr-osmosdr just before support was added for the feature, which in turn depends on a slightly-too-old version of librtlsdr that exposes the API / ABI for controlling the GPIO pins (…

Tracked now by this issue: