Our build of the v3 rotator and v2 electronics

My group HamWAN Memphis Metro is building a satnog. So far we’ve made the decision to modify a few things. I’ve got a Google Photos Album with pictures as we go along the way. Here are the changes so far:

PS: I’m in the freenode IRC room and our entire group is on Telegram in case anyone wants to chat

Im trying to get setup on the dev network for the receiver, but even though I enter values for every field, I receive the below pictured error. 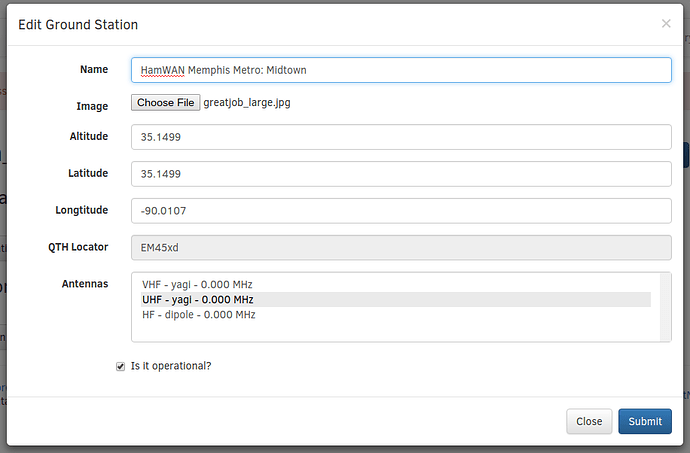 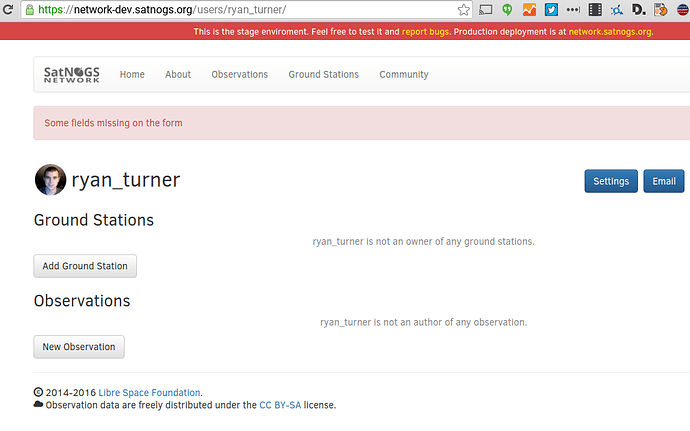 Had to split it into a second post due to post/image limits.

I found that there weren’t steps for the electronics, and that the steps for the rotator hardware were difficult to follow. So, hopefully some of what I’m documenting may help the group, whether thats considering adopting some of the order that I’ve opted to use or just providing more explanation for other users.

I’ve run the ansible client role and made some modifications as a result of my use – see them in the pull request here. Cheers!

Im trying to get setup on the dev network for the receiver, but even though I enter values for every field, I receive the below pictured error.
[altitude field in picture: “35.1499”]

The altitude field only accepts positive integer values (as investigated by @blackbird in the previous thread Problem adding ground station).

Thanks for the heads up! I added to the github issue and will re-register. I’ve also added a pull request for the client ansible role: https://github.com/satnogs/satnogs-client-ansible/pull/1

This cleans it up so that it could be added to ansible galaxy for easier/wider distribution and introduces an easy install via: wget https://raw.githubusercontent.com/ryanturner/satnogs-client-ansible/master/easy-install.sh -O - | sh

Tonight I’ll be adding a task for downloading and installing Kalibrate and then auto-executing that as an option instead of prompting the user for PPM.

As far as the build goes…
Got more fasteners in yesterday, have M5 threaded rod coming in today. The 625ZZ bearings arrive Monday, and the 6007ZZ bearings arrive likely later that week. Belts are on backorder but likely will ship next week. I’m eager to continue documenting my build assembly in that github repo once the missing parts come.

What size imperial PVC does the rotator use?

Hey @ryan_turner [quote=“ryan_turner, post:1, topic:596”]
Im contemplating using a printed motor mount instead of the brackets – any advice on this?
[/quote]
I think it is better to use the steel made motor mount for better stability. We have never tried to print.

For power, we’re going to put 48v on a cat5 cable and run fuses and a buck converter at the station. The site we’ll put this on likely wont permit mains power where the rotator would be, and I estimate that the power draw from the steppers exceeds even the standards for 802.3at PoE+

Here, you can see measurements about the power of rotator.

Very nice, you can use satnogs wiki, to add your assembly steps with corner brace support. Also, let us know about your problems in assembly guide by opening issues in satnogs-rotator repository.

Now, we are working on a guide for all rotator electronics.

What size imperial PVC does the rotator use?

Thanks for the help!

I have a question about the antennas now. I’m getting ready to cut pieces for this one: https://github.com/satnogs/satnogs-antennas/tree/master/Helical/UHF-434-8

I’d like to cut it out of Hardboard Tempered Panel (a wood product) and then coat it in polyurethane rather than use acrylic in order to save money. Anyone have a reason why that wouldn’t work? I figure a few small coats to have it soak in, then a few thick coats to get protection in place.

Also, I see the xls file including details about the antenna itself, but no form of a BOM. Any idea how many of which pieces I need to cut and prep?

I’d like to cut it out of Hardboard Tempered Panel (a wood product) and then coat it in polyurethane rather than use acrylic in order to save money. Anyone have a reason why that wouldn’t work? I figure a few small coats to have it soak in, then a few thick coats to get protection in place.

No, but if you are going with wood you should give it a steampunk look!! In all seriousness, it will work fine just may have a lesser life than PVC (unless treated properly). Some of us here in Indiana have been known to use laser-cut wood in the rotator assembly.

Now, for the helical antenna - beware that the 3d printed parts are all sized for metric PVC and will not fit the imperial PVC we have access to here in the states. As I understand it, the source of the parts was originally done in a proprietary modeling app before apps like openscad and freecad were adopted. As such, changing them for imperial sizes means recreating them from scratch. I started working on this as I have a pile of parts for such an antenna sitting on the ground, and I have the Y adapter done but I think that was it. If this is hanging you up I’ll try to prioritize the rest. In the meantime I’ll go looking for where I saved that Y adapter as it didn’t make its way up to my repo.

Glad to hear its tested and working for some other folks

I was actually speaking about using that for the new helical antenna which replaced printed parts with lasercut 5mm acrylic. I’m still looking for details on that antenna btw. I don’t know how many of each piece I need to cut. A few photos of an assembled antenna would be helpful too.

Thanks! Belts arrived yesterday and they look great. Bearings arrive tomorrow so hopefully I’ll finally have this thing taking shape. PCBs are still weeks away, though.