Regarding Observation 6379668 … What is that signal in the last 2 minutes of the obs? I don’t see any strong enough sat flying over at that time at that frequency with that kind of signal…

The strongest signal in the waterfall doesn’t seem to be your target but a local terrestrial signal, since it is shifted by the doppler compensation. The signal in the last 2 minutes is a satellite that was rising in elevation.

Maybe ROBUSTA-1B is that signal in the last 2 minutes and the TLE data was outdated. Looking at other ROBUSTA-1B observations it seems to me like that signal is a better match:

Have you seen local signals / interferences in 437.325MHz before?

The strong noise doesn’t surprise me - I get a lot of it. So you think that both the signal at about 110 seconds and the last two minutes are from ROBUSTA-1B? 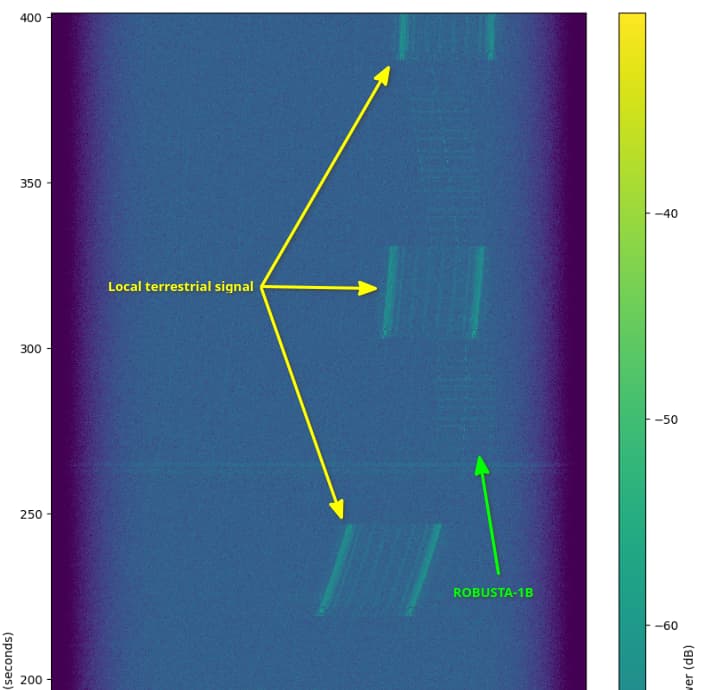 Nope, I just attached an annotated screenshot for clarity. I think the TLE data might have been off, hence the doppler correction was incorrectly applied. The signal I marked with yellow arrows is a local signal in your neighborhood, not coming from a satellite. ROBUSTA-1B signal would then be the one marked with the green arrow.
It’s just my guess. It would be worth to monitor the spectrum and try to find out if that huge signal (marked in yellow) is actually a satellite or not.

Keep us posted with your findings!

The ROBUSTA-1B transmission is published as being both AFSK 1k2 TLM and TLM CW, both on the same frequency of 437.325 , Here’s an example from SatNOGS ground station 2015 with a valid AFSK AX25 decoded frame from one day ago:

and one for TLM CW

The signal looks to be every ~90 seconds with bursts for just a few seconds. The TLEs seem spot on based on the waterfall (centered

@marianoboragno I’m not sure what signal that the green arrow points to but it does not appear to be ROBUSTA-1B . I’ve scheduled some more ROBUSTA-1B observations at my stations in hopes of catching whatever that off frequency signal is (assuming it’s not terrestrial in nature!).

Interesting, don’t see those frequency shifts very often, another example could be Observation 6360913: Astrocast 0.2 (44083) ? As for this one, but this highlighted signal in the same obs is also from the ROBUSTA-1B? 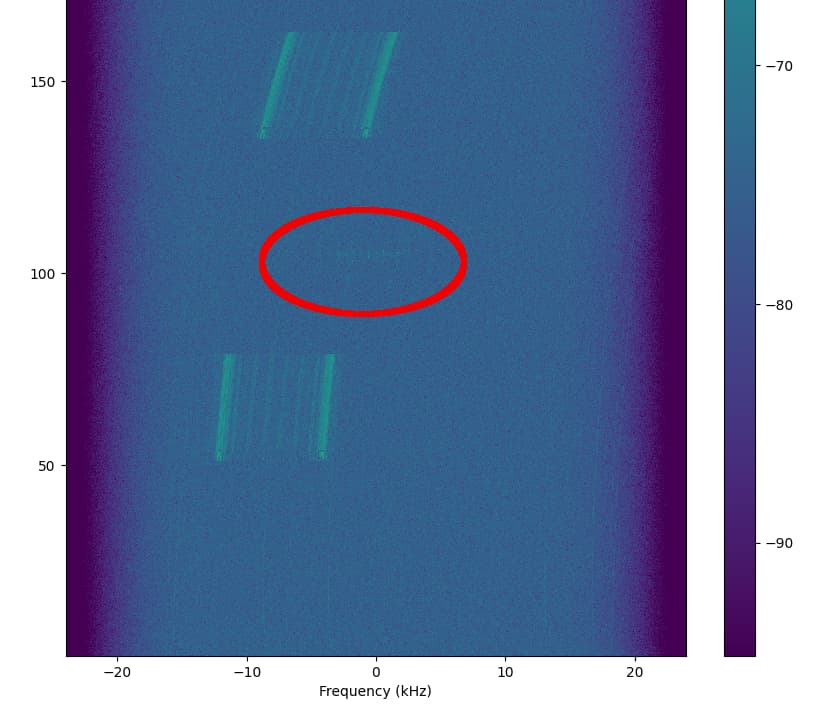 Oh, interesting, I didn’t see that faint signal. That looks like ROBUSTA-1B, no doubts, and the doppler correction is correct.

Then the green one must be another satellite, I didn’t find any in the DB that could match. The yellow one still looks like local interference to me.

ok, so that would be yet another unknown sat there?

And what about SatNOGS Network - Observation 6360913 ? Also looks like another non-terrestrial source mixing into the Astrocast 0.2 obs? 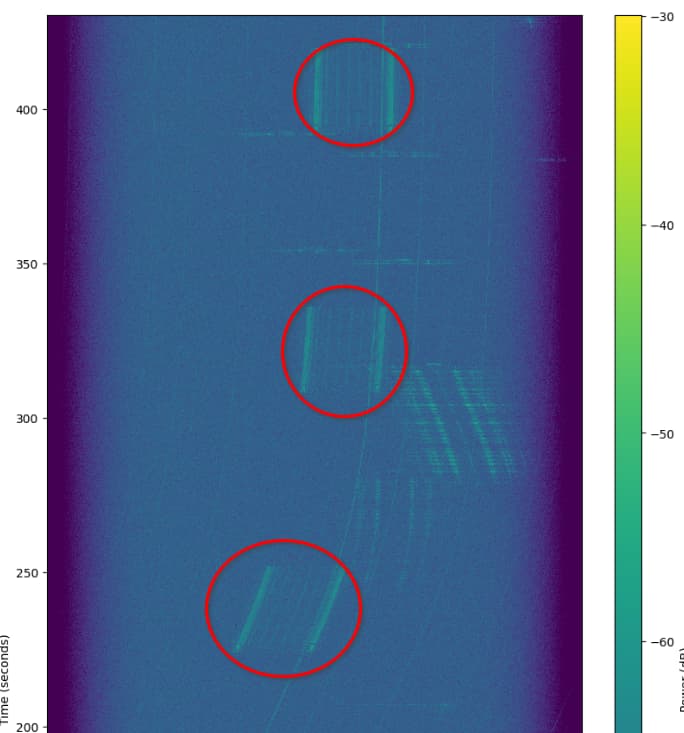 I see the same signal. That signal I encircled in red is terrestrial to me, that doesn’t seem to be coming from a satellite.
Do you agree with that?

yes, sure, sorry, I didn’t mean those signal “lines,” clearly following the Doppler curves. I meant the signal to the right of your lower two circles around 300s and between the upper two highlighted areas in your image - also not staying at the same frequency. That signal doesn’t look like a terrestrial source to me nor does it seem to belong to the target satellite of this obs.

Oh, yes, right. The more I look at those captures, the more signals I see. LOL!
But I can’t figure out what each of those are. Hopefully somebody with more experience in the forum will take a look soon.