Not sure if this is really DODONA or another bird in that pack, but it looks to be ~19k2 baud, doppler is off a bit though

Pretty strong signal for such a low pass, however I’ll do some checks. My guess is that it is either another satellite or a ground station trying to contact a satellite following its doppler shift.

@fredy, thank you for checking.

My v3 rotator has been under repair for last few days so my yagi antenna has been in a fixed position pointed due east @ 30 deg elevation for all recent observation including this one.

If it were a ground station (was thinking Boston Univ/CuPID station which is ~ 200 km due east for me) but there is signal fading at beginning and end – which is what I’d expect for a satellite since there are mountains to my E and NE and that obstruct at about 6-10 deg elevation.

Since my antenna is in a fixed position I would expect a signal from a ground station to be relatively constant for the duration of the pass. Based on this, I do think it is a satellite that had an approx max elev of 35 degrees at that time – but probably not DODONA.

We may never know!

We may never know!

Looking at the orbital tracks of DODONA/NOUR 01 at the time of this observation, NOUR-1 had a 30 degree max elevation orbital track to my east at the same time 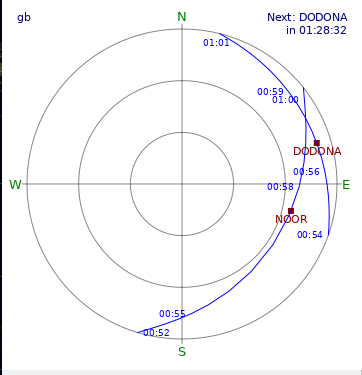 This would certainly explain the doppler shift and strong signal (by NOUR 01) during the lower elevation DODONA observation at my station.