Anyway - wonder about all the extra data. Looking at https://www.qsl.net/k/k4kdr//how-to/jpg-from-raw-data.pdf and the data there is an ffd8 start of image and ffd9 end of image

Trying in a hex editor - there were interestingly 128 c0c000 kiss frames between those - but appearently not an actual image as it is full of invalid jpg ‘markers’ ffxx . Giving up.

Also - the data w/o kiss frames is 76502 bytes long, so by sheer statistics the words ‘ffd8’ and ‘ffd9’ have a good odds of appearing randomly

I think any given 16bit word has an even chance of appearing in any randomly distributed series of 65536 16bit words.

Maybe @jwc can shed some light on what’s going on.

I ended up with a similar outcome as above with GRIFEX - a raw IQ file named 2411883.raw which should be Orbital Factory 2 with no signal, but actuall contains the IQ for 2411886 the FM Ham sat Saudisat 1C with lots of activity 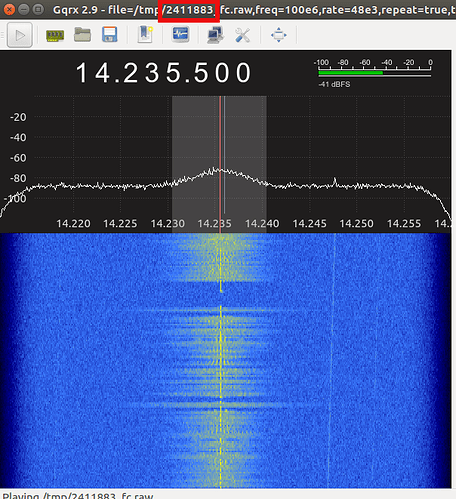 Hi, thanks for the tag. The original observation is a GRIFEX pass. Nice job decoding! We are downlinking archived data from the GRIFEX satellite. Beacons are mixed in, so you’ll see them every so often. Not as fast as every 10s because the data downlink drops the beacons sometimes.

Not sure about the mislabeling/tagging you’re seeing.