Regarding Observation 1037954 …
Hi
I am doing my PhD at UniSA. Can you please share your recorded raw data? I want to process it to extract Doppler curves.

HOWEVER - SatNOGS performs doppler correction as part of the demodulation chain, and the IQ recording is after this doppler correction step. As a result, you can see that the target signal from LightSail-2 appears as a vertical line in the waterfall, while other local interferers appear to shift in frequency throughout the pass. I’m not sure you’ll be able to do whatever you are after from this recording.

What information are you after in particular? As you can probably guess from my station location, I am based in Adelaide, and I have fairly regular dealings with the likes of Bill Cowley, Ady James, and others in ITR.

Hi,
Yes, I am at ITR too (joined in March and working with Dr.Gottfried). I am looking for raw data without any correction. I simply want to see Doppler vs time for the recorded signal for same satellite over multiple passes. I thought you record data before applying the correction.
As you mentioned, Doppler compensation is already done but in the waterfall I am still looking some signals which are not compensated for Doppler. Can you please tell a bit about those signals?

You’re wrong! They are doppler corrected but are of terrestrial source. That means they are static in their frequency, as they are not moving relative to the observer, and do not underly doppler shifts. That’s why a straight line for a satellite signal results in curved lines for terrestrial signals.

Ok Thanks, I got it. It means I need to have my own setup running to record raw data (before correction) and I can’t find here on SatNOGS.

Correct. The STRF tool written by Cees Bassa is what many of us use to analyzer doppler from satellite passes and perform orbit determination: https://github.com/cbassa/strf

Dani Estevez has a blog post giving some information on using this tool to fit a particular doppler curve to a satellite TLE: https://destevez.net/2019/01/an-strf-crash-course/

@cgbsat and others have performed much more complex analysis using multiple passes to determine the orbits of unknown objects. I’m sure he could provide more information.

Thanks for your help. I already have done work on orbit prediction by using TLE’s and I have predicted Doppler vs time curves for satellite. Now, I just want to validate predicted results with actual measured values.

You can find a zip file with 35 Doppler curves of the CW signal from MAX VALIER SAT (SatNOGS DB - MAX VALIER SAT) at Dropbox - 42778.zip - Simplify your life

These have all been obtained with station #39 running in STRF mode in parallel with SatNOGS observations.

Here’s a plot comparing the Doppler curves from August 2019 with the CSpOC TLE. 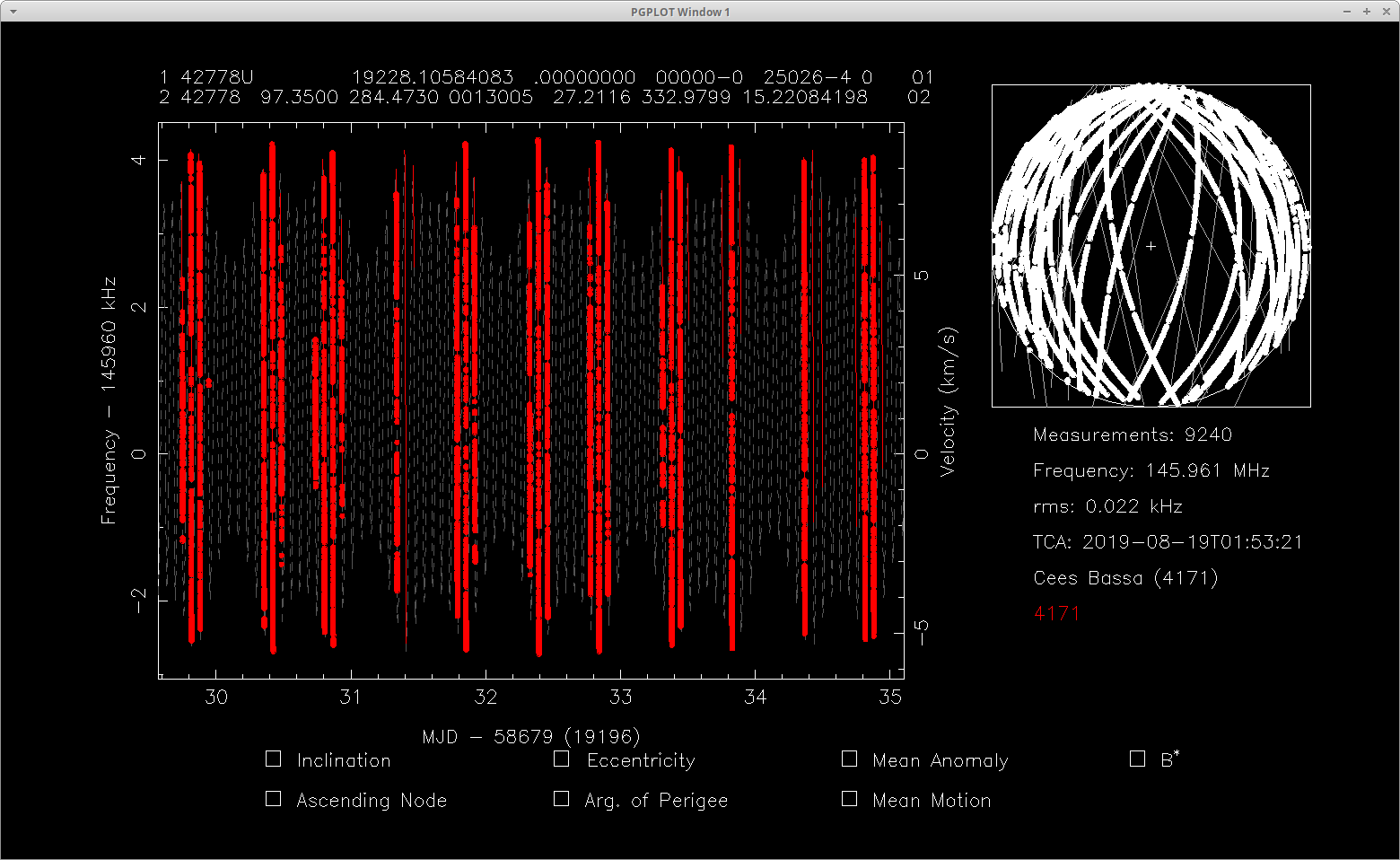 Can you explain a bit around this? How much is the divergence? I am not able to understand it through the graph. Thanks!

Using those Doppler curves to fit the orbit from scratch, I get this TLE.

The positional difference at the time of the TLE epoch between these TLEs if about 5 km.

What is your method to run STRF in parallel with SatNOGS. Do you have 2 SDR on the same line or how do you prevent the doppler correction in STRF?

It is very hacky, but involves the following steps:

My VHF (#39) and UHF (#40) stations run from the same x86_64 PC. Hence, I use 10*rigctl_port to differentiate between VHF and UHF recordings scripts, this to prevent both flowcharts sending UDP packets to the same port. The VHF and UHF satnogs-clients then have their own SATNOGS_PRE_OBSERVATION_SCRIPT and SATNOGS_RIG_PORT variables.

By using the UDP port, the gr-satnogs flowcharts can run even when starting nc or rffft failed, or are even turned off.

As you can see from the VHF pre-observation script, it only runs on the CW and AFSK flowcharts. I’ve also hardcoded the 1e6 sample rate, which is the gr-satnogs definition for an rtl-sdr. The -n 3600 option means only a single bin file is written by rffft, as the passes are usually shorter than 20 mins or so.

It is impressive. May be developers could tell us if the sink could be integrated in gr-satnogs mainstream. It looks like a feature some other people would want.

Hi
I want to open all 35 records by rffit, but it show only one record for me.
can you help me which command shows all record with rffit and pgplot window?

Hi, the .dat files contain simple text values, which can be read with a text editor. You can merge the .dat files into one big file. For merging run something like:

Be careful to run this only once, otherwise the total.dat gets full with double values. And use total.dat in rffit.

Hi,
thanks so much. It worked me well

Hi,
I have a problem when I select points by s and push the i button for inter rmse limits. when I use this command, the core dumped error showing and cannot set limit rmse. can you help me solve this problem?