Here’s something that I’m scratching my head about but hoping there is a simple answer.

Two observations 170531 and 169968 both on the same day, within an hour of each other and near enough the same freq. But with two different observation waterfalls.

Here’s the quiet one with a good looking waterfall 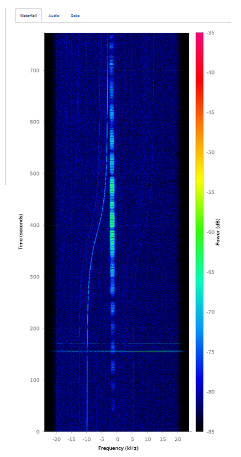 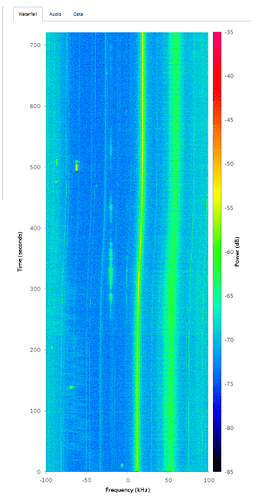 So here are a few interesting environmental facts

Am I alone in this?

You may be comparing apples to oranges, as the waterfall plots have different bandwidths. It looks like the first plot has 48kHz bandwidth, and the second 200kHz. Since both are channelized at 1024 channels, the channels in the second plot are larger and hence will contain more power.

Do you have the same problem if you compare waterfall plots taken with the same decoder at different times of day?

Not that I’ve noticed.

I don’t really think of it as a problem as such but there does seem to be a marked difference in the way that the waterfall plots with different bandwidths. I get a similar change in density when I change the bandwidth on my HF rig (that has a panadapter) but the power (rh axis) doesn’t change. I suppose I could be comparing apples and oranges.