Thanks for the suggestion @Alex !

I added the satellite and frequency in the DB

I definitely got something from the satellite today, though I have no idea what it is or what it is supposed to be. It is listed as FM narrow, though it looks very different on the waterfall.

Nice @csete ! I added it as NFM as I could not find any source of information about the encoding or modulation of this transmitter.

My understanding is that this beacon was used for doppler calculations to determine geographic position (early GNSS system!)

Thank you very much for adding the satellite.

I don’t know, if it transmits something decodable,
but I think it’s amazing that this satellite is
transmitting now for over 50 years.

Yes, it’s fun to receive signals from such an old satellite, whatever it is transmitting

Nothing from my station’s observations yet, but they’ve all been at night-time.

Transmitter only works in daylight.
Batteries are dead.

I think this pass shows very well how it suddenly ceases transmission as it goes from daylight into eclipse: 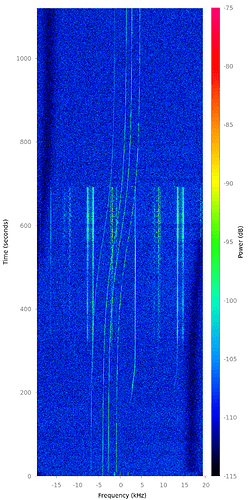 I didn’t simulate the pass in gpredict or anything like that, but It was at 2 AM local time and the satellite was coming from North, so it sounds plausible.