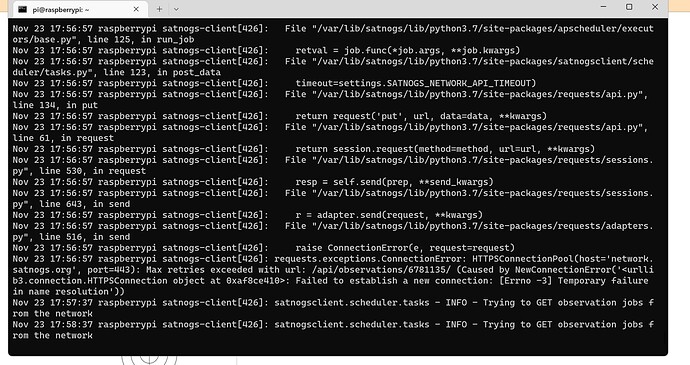 I do not see any problems with my WLAN, so I would like to know, whether server has a problem at that time, or if this is “normal” behavior. I see, that waterfall was uploaded later, so obviously this is a temporary problem. Can observations get lost because of such failure?

Thanks for you help!

If this happens you may also have a look at https://status.libre.space/

Thanks for the link. But I see, that last incidence on server side was reported 8 hours before, my logfile is only 4 hours old. So this problem is not mentioned on the website. So is this normal bevhavior or does the error show me something?

It’s possible your router’s LAN internal DNS servers were the issue at that point in time. On my stations, I forgo using my LAN DNS and rather point my resolvers directly to Google’s DNS (8.8.8.8 and 8.8.4.4). It’s not bulletproof but it’s better than the DNS of my local ISP.