Hi, my 2 ground-station, ID-568 and ID-724 have recently been finally updated to bullseye and client 1.8.1
They have been running without getting much attention for years due to other commitments.
VKFF & WWFF.
I would appreciate if some of those, who are better acquainted with the SatNOGS system, would schedule some observations and post comments on the results.
My stations have been off-line for long periods and probably been off the radar for many for too long.
I have forgotten a lot and have to slowly bring myself up to speed again.
I’m acquiring some 23cm gear and wondering if there are any satellites near 1296MHz.
Thank you for taking the time to respond.
73 Bob vk2byf

I will run a couple of satnogs-schedular jobs and see how the system is able to decode successful.

I had similar problems to yours when I first set up my SatNOGS stations (ID-1936 & ID-1946). I got around the low count of scheduled passes by adding an extra RPi with a scheduler. I now get about 150-200 passes per day and in about 20 months of operation am up to 65k+ captured passes. I only added it to schedule my UHF but will probably add it to do the the VHF sooner or later. It is pretty east to do.

The reliability I got around by adding a timer to the AC power supply that turns the system off and back on at midnight. I still get occasional lockup but that is generally solved at midnight. I did have a scheduler RPi failure and had to rebuild that so it is not fool proof.

My SatNOGs station has a pic that shows the setup and has a short description. Hope this helps.

Thanks, John for your ideas. I had plenty of users until I had problems with the failing upgrades. Turns out the SD cards had bad blocks and I had to start from scratch. In this application, they just wear out. Too many read write cycles in 3 years + of 24/7 operation.
I went the other way. Making sure the power came from Solar/battery power with an old analog 3 terminal regulator to provide the 5.1V without the switching noise of ordinary regulators.
There is a script to test if the RPi is running, if not, it does a reboot. If that doesn’t work, I get an email telling me, I’m off line. I just unplug and replug the power plug.
73 Bob vk2byf

Thanks, I’ll look out for your report.
Bob

Sounds like you have a pretty good solution. One other option that my mate Mike runs on the station YMCF - 2108 is to use one of the internet connected remote switch. His site is out at a remote airfield near Dalby in Queensland. Great site from a noise floor/interference point of view but a 3-4hr drive away…so the internet connected switch is perfect.

The seperate scheduler is great if you really want to ramp up the numbers.

Hi Bob,
Re frequencies: you can see the downlink frequencies used by all the satellites in the SatNOGS database at SatNOGS DB - Transmitters (click on the ‘List’ button and then the ‘Downlink’ column header to sort down or up). As far as I can see though, there’s only Hilat using 1238.084 MHz - everything else is either above or below. Time to make yourself a new antenna!
Regards, David.

Found it, thanks. A handy table to use. The transverter is only good for 1240 - 1300 MHz and only 2W.
I have built a couple of helical antennas for receiving Inmarsat which worked well once pointed in the right direction. 6 1/2 turns are enough.
73 Bob

The VHF station seems to be fine, UHF isn’t receiving, even satellites where we know they have a strong signal like GRIFEX.

OK thanks PEOSAT. That was very helpful. I have examined the wiring to the UHF QFH antenna and I suspect power was not getting to the LNA. I’m not sure if I fixed it, but it looks OK electrically.
I will continue to monitor and have scheduled some observations on ID-724 UHF, to see if I fixed the problem.
I may have to bring down the antenna mast for a closer inspection.
Both the UHF and VHF antennas are home-brew QFH antennas with LNA4ALL preamps on the same mast. The UHF one may have issues, although they are both pulling the same Current.
We shall see.
Thanks, Bob vk2byf

I don’t know what kind of setup you are using on UHF, maybe you can share the support information.

Run sudo satnogs-setup and select Advanced and then Support copy and past the output.
If you use the option “</>” preformatted text it will keep its format.

My VHF & UHF setups are identical. QFH antenna with LNA4ALL preamp at the antenna. Raspberry Pi and RTL-SDR. Not the clone. Has been working for 3 1/2 years, just recently upgraded to bullseye and SatNOGS Client 1.8.1
Putty won’t let me cut and paste the support info. I would have posted it by now.
I found I get a better result by increasing the RF gain setting from 30 to 35 on my ID-568 VHF station.
My ID-724 UHF is on 35 as well now after the upgrade.
Thanks, Bob

Thanks for the reply, the support info would be very useful.

My own system 431 has RTL-SDR and NOOLEC LNA and a 3 element yagi point up 90 degrees. 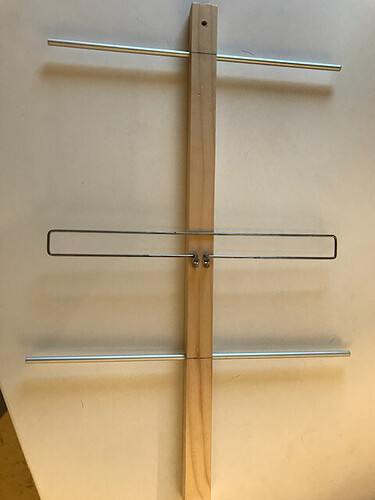 The Client has the following settings:

I think I have found my problem with my ID-724 UHF ground station.
We have a saying down under. If it’s not broken, don’t fix it.
After updating & upgrading my ID-568 & ID-724 ground stations, I decided to replace some cables from the SDR to a switch & power box with some nice brand-new Chinese SMA-BNC cables to tidy up my setup.
One of these new cables had a dead short, hence the UHF SDR could not receive anything. Not even noise. Please feel free to schedule some observations to test my fix.
Thanks, Bob, vk2byf

I am familiar with that saying, but the opposite is also true.

Good to see you found it and I will create a couple of observations.

All the best Jan PE0SAT

I’m acquiring some 23cm gear and wondering if there are any satellites near 1296MHz.

The only satellite I know of is FOX-1D (I think) which has an experimental L-band uplink, but unfortunately no downlink…

Thanks, jubitersaturn09, I’ll look into it further
Bob