There are already scheduled observations for the event on online and testing stations that had good results in the last event. Semi-automatic decoding of the images will be done as soon as possible after vetting the observation as good, feel free to help us with vetting on your own or other stations.
@ar3itrary also will try a new decoder which like the NOAA one will decode the images during the observation. Any IQ files of this SSTV will be bery useful to test this new decoder after the event, so anyone that could provide them please contact @ar3itrary or me.
Don’t forget that you can get a prize for decoding SSTV images on this event, check more at the announcement above!

Satnogs Stats:
According to several reports there was a low audio issue on the transmitted signal, this resulted to less successful observations and less decoded images. Most of the decoded images came from audio that was amplified by 17dB.

The observations can be found at the network.

The map showing all participating stations listed above and the ground track during the observations:

A collage of the best received images: 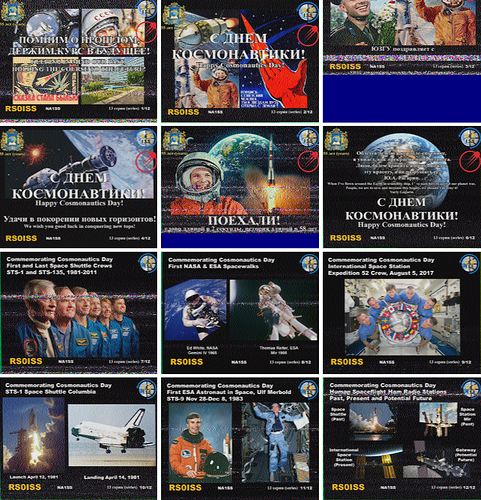 Coverage diagrams that include also bad and failed observations: 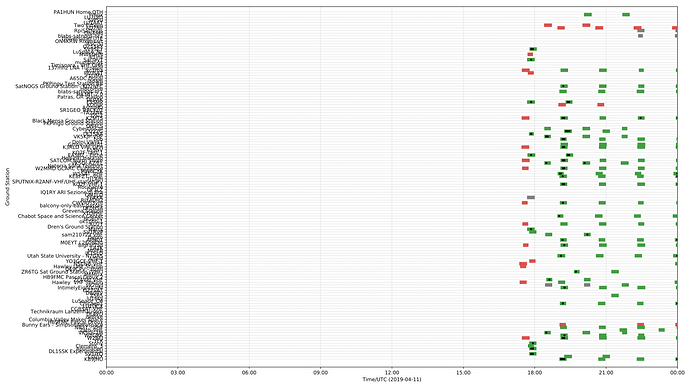 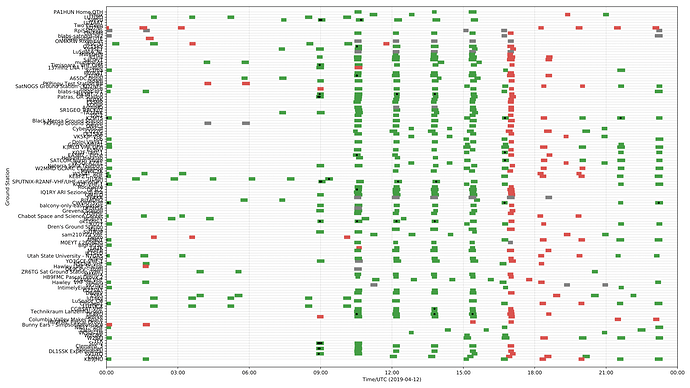 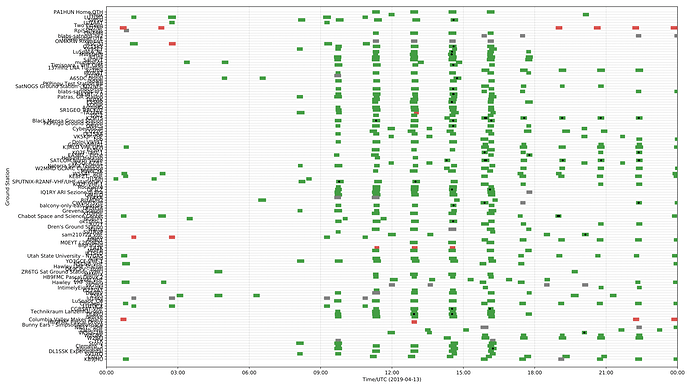 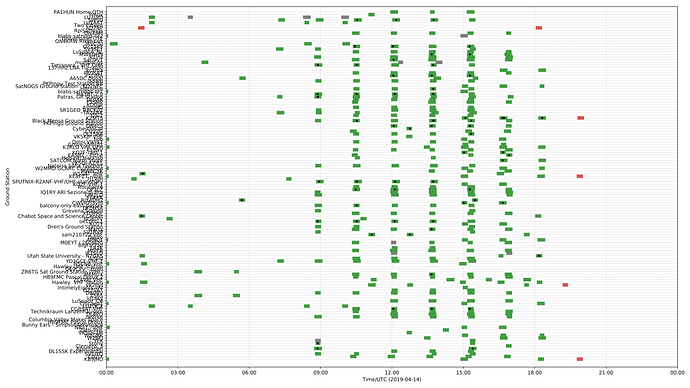 Diagrams and maps are created using code from @kerel’s repo.

Looks like someone turned the volume control down on the SSTV generation laptop: https://network.satnogs.org/observations/586219/
Pretty low modulation…

Yep, carrier is blowing out my receiver - but the actual SSTV signals are getting weaker and weaker.

Following these instructions to amplify the sstv part in a .wav file generated from observation 585915, I was able to get a good image. I’ll take a look tomorrow or during the weekend and see if I can automate this process, in order to decode and upload images from the rest observations.

An interesting one.
Observation before it has the low modulation also.

The event is over, I’m currently doing some more decoding with the change of amplifying every audio by 17dB. This give some more decoded images and I expect it to end later today.

After finishing and uploading these last decoded images, I’m going to add the stats of the event in the first post.

For the station owners, don’t forget you can get a prize by uploading your station’s decoded images. Deadline is the end of the April 16th, 2019 23:59 UTC. Diplomas will be sent by April 27th. Datetime on the decoded images filename is almost accurate, so you can use it on the uploading form.

First post is updated with the statistics of this event.

For the station owners, don’t forget you can get a prize by uploading your station’s decoded images. Deadline is the end of the April 16th, 2019 23:59 UTC. Diplomas will be sent by April 27th. Datetime on the decoded images filename is almost accurate, so you can use it on the uploading form.
[/quote]

Recording of the whole event.

I agree it’s really awesome. I hope such visualisations will eventually become standard functionality in the network

Eh, half of Alaska is missing, too…

I’ve noticed this too. For some reason when you go in cesium from globe to the map then it zooms the map as in the above video leaving out some areas/countries… so you need to adjust zoom manually.

Haven’t searched this more but it maybe has to do with sth with the canvas size.

I might be able to adjust it programmically xD

Hi,
I know I’m a little late to the party, (has it really been three weeks already?)
however I still wanted to give a little evaluation of my experimental in SSTV-decoder in gr-satnogs.
Due to a severe case of “stuff happening all at once” I did not get around to properly looking into the issue until now.

So if look at my the observations of my station during the event you’ll find a lot of decoded images that look like this: 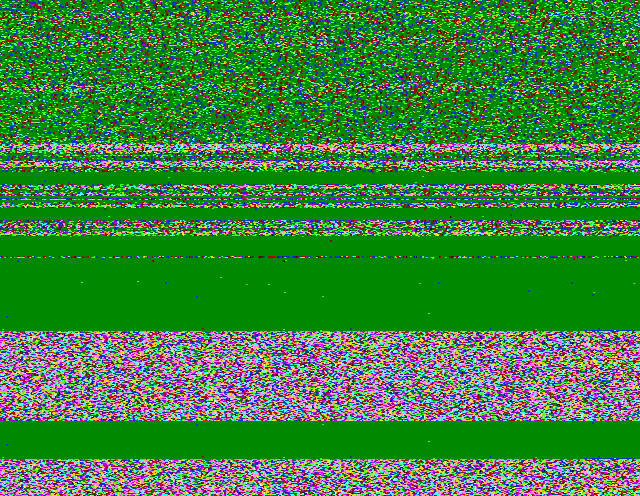 Short explanation what you can see there:
The colours in SSTV are encoded as frequencies.
The greenish colour comes a frequency just above the frequency for the sync symbol.
Also there has to be at least one recognizable sync symbol in the signal,
otherwise the decoder would not start writing out images.

In addition to that I noticed that observations with two distinct transmissions in the waterfall resulted in two images being written.
So at least the line sync did work as expected.

However the reason those images did not decode (at least with my decoder) is a little more complex.
The FM modulated colour signal is modulated on the carrier using FM modulation, so if you run FM demodulation twice you end up with signal that has the colour information as amplitudes.
During this event the first layer of FM was under-modulated, this means after the first FM demodulation step, which should be the , the signal level is really really low.
In theory this should not pose a problem, as there is no information in the amplitude of the signal.
However in the in the real world, if decrease the amplitude, you will run into in SNR issues sooner or later, when your FM demodulator can’t distinguish signal and noise anymore.

And that’s what happened in my decoder. 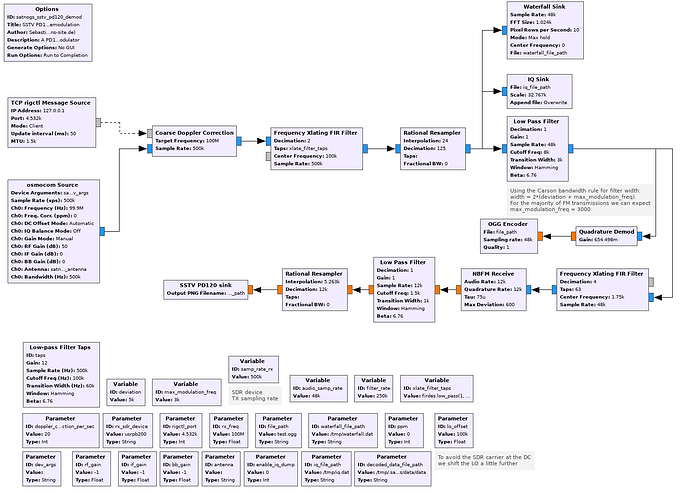 The NBFM Receive block refuses to work with the weak signals.
I tried added some amplification, which helps a little, but does not really lead to properly decoding pictures.
My theory here is that since the signal is so weak and requires 20 to 25dB of amplification and I’m working in a discrete domain (32bit floating point numbers) that there is dynamic range problem.

The sync pulses still decode okay since the signal stays on the same frequency longer than for the actual image data, so the receive block has a better chance to detect it correctly.

As of now, I don’t have a good way of tackling these problems, other than hoping for better transmissions in the future.

Finally I’d like to thank anyone who provided me with IQ samples, even if the samples only confirmed that my decoder is pretty much useless for those weak transmission.