Fresh install on rpi3 after problems

One of the things which we spend a lot of time thinking about here at Raspberry Pi is security. Cyber-attacks and hacking are, sadly, constantly on the increase, and Raspberry Pi computers are as much a target as any other, just because there are so many of them out there nowadays!

Over the years, we have gradually ramped up the security of Raspberry Pi OS; not in response to particular threats, but more as a general precaution. There is always a balance to be struck, however, as security improvements usually carry a cost in terms of usability, and we have tried to keep the system as convenient to use as possible, while having an acceptable level of security.

Up until now, all installs of Raspberry Pi OS have had a default user called “pi”. This isn’t that much of a weakness – just knowing a valid user name doesn’t really help much if someone wants to hack into your system; they would also need to know your password, and you’d need to have enabled some form of remote access in the first place. But nonetheless, it could potentially make a brute-force attack slightly easier, and in response to this, some countries are now introducing legislation to forbid any Internet-connected device from having default login credentials.

So with this latest release, the default “pi” user is being removed, and instead you will create a user the first time you boot a newly-flashed Raspberry Pi OS image. This is in line with the way most operating systems work nowadays, and, while it may cause a few issues where software (and documentation) assumes the existence of the “pi” user, it feels like a sensible change to make at this point.

The Raspberry Pi setup wizard should be a familiar sight by now. It was introduced several years ago, and runs on the first boot, configuring international settings, connecting to wireless LAN and installing any software updates; it also prompts you to change the default password. But the wizard has always been optional – if you pressed “Cancel” on the first page, it just went away and you weren’t forced to use it.

From now on, working through the wizard is no longer optional, as this is how a user account is created; until you create a user account, you cannot log in to the desktop. So instead of running as an application in the desktop itself as before, the wizard now runs in a dedicated environment at first boot.

When one uses the rpi-imager, a tool to create a bootable installation media you are able to create a user, password and also start service after install. 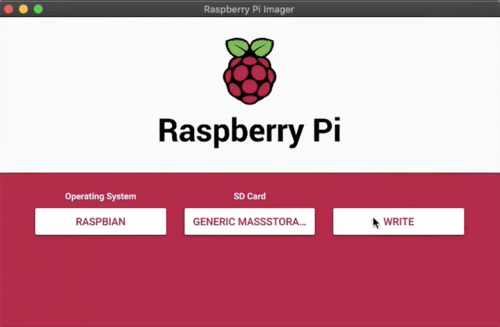 Flash Raspbian to your SD card with the Raspberry Pi Imager, our brand new imaging utility. Download it free today!

The wiki has a new section about getting a password set up if you use the pre-configured image and want to ssh in directly upon first boot:
https://wiki.satnogs.org/Raspberry_Pi#Pre-boot_user_creation

There is work-in-progress to get the SatNOGS image to be added to the the Raspberry Pi Imager list of distributions, but it isn’t quite ready yet. When it is, the wiki page will be updated (and be shorter!).

There is work-in-progress to get the SatNOGS image to be added to the the Raspberry Pi Imager list of distributions, but it isn’t quite ready yet.

Even before this is done, you can edit our image from the rpi-imager tool and add user/ssh etc!

Thanks for the info. I did figger it out and get it running, I used ruffus to create the image on the SD and didn’t realise it would of asked for user and password to be created if I had used rasbery tool to create SD image. Thanks Again.