Can a simple TV rotator be used? (Azimuth only)

Using Simple AZ-only TV rotators: This topic is coverd in the remainder of this page.

For almost all of the Low Earth Orbiting (LEO) amateur satellites a modest beam antenna fixed at 15 degrees elevation is more than adequate to bring in signals from the digital packet and voice FM downlinks to your dual band FM radio. A simple TV rotator and modest beam is all that is required. This is a bargain compared to the typical AZ/EL OSCAR class satellite tracking station. And it also serves perfectly well for terrestrial VHF/UHF work as well.

Can this be a viable mid-grade solution between fixed antennas and AZ-EL rotated antennas? Comments?

In general there have been reports of some people getting ‘results’ with not particularly directional antennas being used with an Az rotator at around 30 degrees (or sometimes lower). I have a vague memory that it was with either an eggbeater or dual moxon antenna rather than a yagi though (i.e. not overly directional)

An egg beater does not need to be rotated. And, yes, a Moxon could be rotated.

The idea would be to adapt the control protocol to just turn the array as the pass comes overhead. Since TV rotors can’t go around 360 degrees, there may be some challenges for some passes that would have to go through the dead spot.

I can’t seem to find the article but it was along those lines. 30 degrees seems to stick in my mind but I can’t remember why

I posted the link above…

The recommend pointing at 15 degs in the article. I might take a try at this. Because if it doesn’t work I am half way towards a full rototar.

There was a different article @WA4OSH. I can’t find it. one day it’ll turn up and I’ll post it here. I found it whilst looking at antennas funnily enough

This is definitely feasible…

One thing we could do is to add a “max elevation” to a ground station. We already support a “minimum elevation” so this shouldn’t be too difficult to accomplish.

Here is an article that uses a modified off-the-shelf TV rotator with the antenna pointed to a constant elevation. 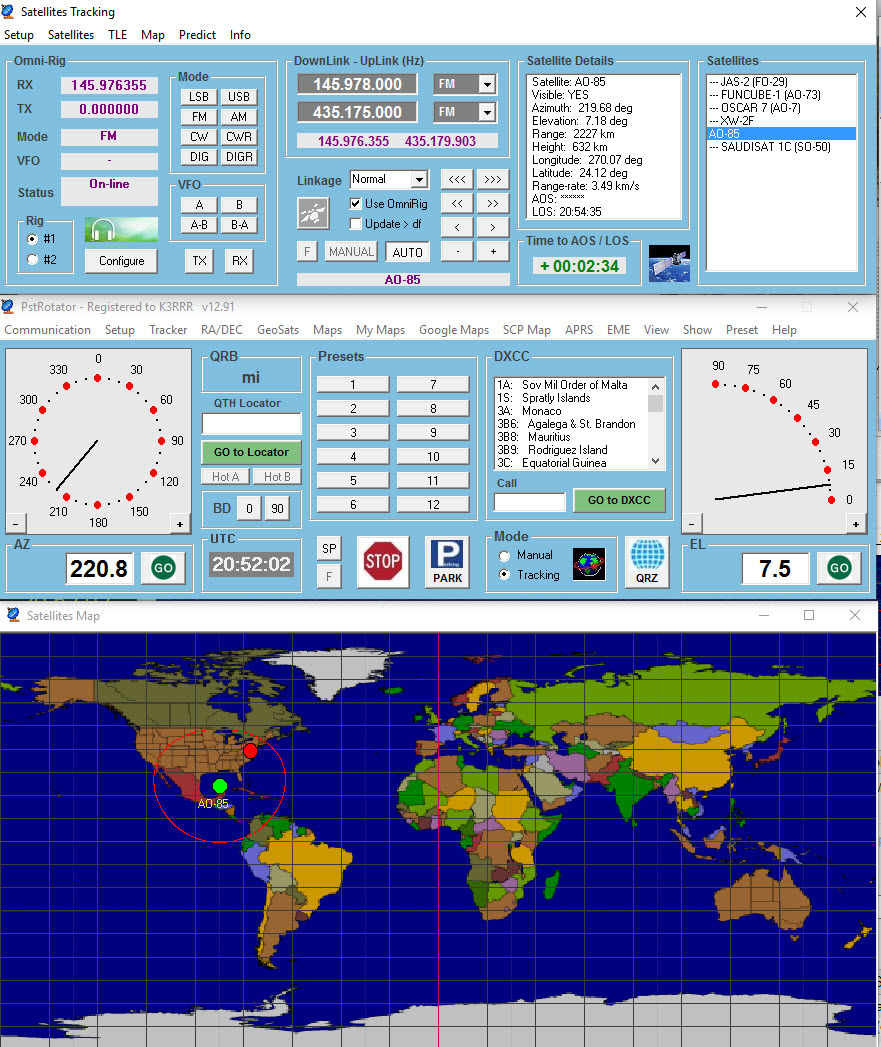 How would you like to have a complete, cheap computer controlled rotator system for working the current 18 (soon to be at least 20) popular, active ham radio satellites for a total cost of under $350 including antennas, software, interface and...

Ordinary TV rotators can only go around 360 degrees. Are there azimuth limits in the rotator program?

The rotator interface typically knows the limitations of the rotator it is configured for (such as with the K3NG arduino code) and if the rotator hits the overlap point it will reverse to go around and meet up with it on the other side.

If you are talking about “blackout areas” that has been a long standing feature request: https://gitlab.com/librespacefoundation/satnogs/satnogs-network/issues/127

I take it that you lose 10-15 seconds during a overlap point turn-around? Which direction do people prefer to make the overlap point (assuming coverage is equally good in all directions)?

Yes, that’s the tradeoff. Some rotators and interfaces support an overlap. My G-5500 with the K3NG interface is setup to stop at 0 degrees.

You can see the impact of what you described here, where the signal fades out while it turns from 0 back around to 360:

I remember @pierros calling this a “meridian flip”.
Is there something that pretends a rotator doing this? Some Az/El rotators do this, too.

(the starting azimuth and end azimuth)