Someone was nice enough to post a list of the deep-space cubesats that will be going up with the Artemis mission scheduled for 29-Aug-2022.

Along with the expected higher frequencies being used, I was very excited to see a few 70cm frequencies assigned. In particular, I was fascinated by the 400.600 MHz transmitter on ‘Lunar-IceCube’ because it was showing a bandwidth of 200 KHz! This was no standard 1200 or 9600 beacon.

Searching online, I found numerous references to this hardware on Lunar-IceCube described as a “UHF Deep-Space Beacon”. I’ve seen many reports of Health Beacon Tones from New Horizons and other interplanetary spacecraft, but never from a cubesat. I set off to learn all I could about the DSN “Beacon Tone Service” and that was very educational and great fun.

At the same time, I emailed everyone I could identify who was associated with the Lunar-IceCube mission to get confirmation that this was indeed the purpose of their ‘UHF Deep-Space Beacon’.

The good news is that I got a reply from the Project Lead at Morehead State University! The bad news is that the UHF transmitter was a late scratch from the mission:

We appreciate your interest in the Lunar IceCube mission. Unfortunately we had to eliminate the UHF radio. The IR spectrometer ended up taking up more volume that we allocated, so we had to eliminate systems and reduce others. We will implement a deep space beacon at X-band as a demonstration- if any of your members have X-band capabilities, we could work with them to detect the beacon.

Hopefully we can fly a UHF beacon on the next mission.

… so, aside from posting some general information here about cubesats on the Artemis mission, I mainly wanted to share this unfortunate news. Anyone who was hoping to listen for a 400.600 MHz signal from Lunar-IceCube can cancel those plans.

Thank you for sharing this information. By chance do you have any information on the X-Band beacon? Exact frequency, power and bandwidth (modulation would be nice).

It’s kinda late now, but depending on the required gain of the antenna, it’s not impossible to build a downconverter for X-Band. So, just for the sake of the exercise, I’d like to review the details and be prepared for next missions.

Don’t know about power, but the frequency & bandwidth for the Lunar_IceCube X-Band transmitter (as well as for the other Artemis cubesats) are listed at that link:

Oh, wow, 2Mbps! I’m guessing that must be spread-spectrum, otherwise the link budget starts making sense only on a 20m dish (there are 34m ones in the DSN, right?), considering a horn antenna in the satellite and a 10W transmitter, which sounds unlikely in a 6U satellite.

Not even a 9.6kHz beacon can be detected with a regular 2.4m dish, but just a CW.

JAXA will transmit beacon or telemetry data with PSK31 on the way to the Moon.
OM turns on the power of SP before separating from OM. Until landing on the Moon, SP emits radio waves with FM modulation by the 3-axis accelerometer in SP. In FM mode, it occupies about 100kHz bandwidth. After landing, the transmission mode is automatically switched to PCM-PSK/PM and sends the digital telemetry.JAXA Ham Radio Club
Will we be able to schedule are ground stations to receive this?

If there is a TLE set and a frequency we can add a satellite and a transmitter in DB and observe it through the Network.

Latest official tle seems to be at https://www.isas.jaxa.jp/home/omotenashi/JHRCweb/tle/latest.txt

can we add this satellite and a transmitter in DB the latest TLE is @ https://www.isas.jaxa.jp/home/omotenashi/JHRCweb/tle/latest.txt

I don’t think this cubesat has been discussed. The orbiter and the surface probe will send telemetry on amateur radio frequencies (437.31MHz and 437.41MHz). Free space path loss is large, almost 200dB. My quick calculations indicate that a parabolic antenna with a diameter of roughly 1.5m/5ft should be able to receive the telemetry.

Manual pointing would be pretty easy, just aim it for the moon

I guess the observations would be pretty long.

It will ride on the very first Artemis SLS launch, which will be quite exciting. 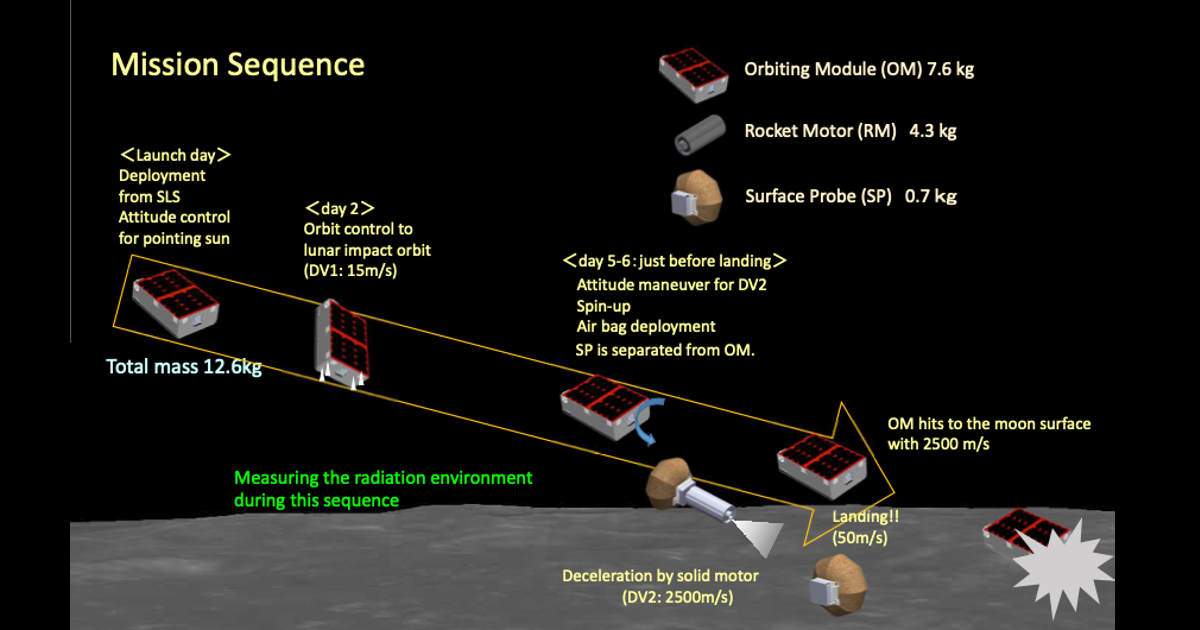 OMOTENASHI (Outstanding MOon exploration TEchnologies demonstrated by NAno Semi-Hard Impactor) is a small spacecraft and semi-hard lander of the 6U CubeSat format that will demonstrate low-cost technology to land and explore the lunar surface. The CubeSat will also take measurements of the radiation environment near the Moon as well as on the lunar surface. Omotenashi is a Japanese word for "welcome" or "Hospitality". OMOTENASHI will be one of ten CubeSats to be carried with the Artemis 1 mis...

Projects – SatNOGS mentions that a parabolic antenna design is in the works. Maybe this satellite is a good reason to interest some beta testers?

Hmm, based on the link budget they described on their page, they were assuming a receiver antenna gain of 31 dBi, which is more like a 20m diameter dish, and that only gave 5dB link margin.

Yes. Sorry, I calculated based on the surface probe which has about 10dB better margin (due to more directed tx antenna).

The Horizons site is what I normally use for objects outside of Earth orbit:

Yes that seems correct according to orbital mechanics - Has a TLE ever been issued for a spacecraft trajectory not bound to Earth orbit? - Space Exploration Stack Exchange

Sorry for the long post, but the latest issue of the AMSAT newsfeed contained the following information that may be useful to followers of this thread. Granted, they are not TLEs.

Tracking Tools for Artemis I

Looking for a way to track OMOTENASHI’s 70CM beacons on its way to the moon? Two hams turn us on to a pair of tracking tools.

During Artemis I, Orion will travel to 40,000 miles beyond the Moon in the first integrated flight test with the Space Launch System (SLS) rocket. Using AROW, almost anyone with internet access can pinpoint where Orion is and track its distance from the Earth, distance from the Moon, mission duration, and more. AROW is available on NASA’s website and on the @NASA_Orion Twitter account.

AROW visualizes data collected by sensors on Orion and sent to the Mission Control Center at NASA’s Johnson Space Center in Houston during its flight. It will provide periodic real-time data beginning about one minute after liftoff through separation of the SLS rocket’s Interim Cryogenic Propulsion Stage approximately two hours into flight. Once Orion is flying on its own, AROW will provide constant real-time information.

On the web, users can follow AROW to see where Orion is in relation to the Earth and the Moon and follow Orion’s path during the mission. Users can view key mission milestones, and characteristics on the Moon, including information about landing sites from the Apollo program. Also available for download will be trajectory data from the flight, called an ephemeris.

AROW also will provide a set of Orion’s state vectors — data that describes precisely where Orion is located in space and how it moves — for inclusion in these tweets once Orion is flying on its own. These vectors can be used for data lovers, artists, and creatives to make their own tracking app, data visualization, or anything else they envision. For more information read Track NASA’s Artemis I Mission in Real Time | NASA.

Joe says to use “OMOTENASHI” as the Target Body. You will find the online app at Horizons System

[ANS thanks Brian Wilkins, KO4AQF, Joe Fitzgerald, KM1P, NASA and JPL for the above information.]

FYI: This article provides details on all the 10 cubesats on the Artemis I mission and discusses the concern that several of them may have had their batteries discharged since initially loaded in October 2021.

This link for OMOTENASHI gives a TLE set: