I’m setting up a new (for now omnidirectional) station 1450 - Northampton. I’m having the usual two steps forward one-step back with some of the instructions but am trying to comment and fix the wiki where possible. 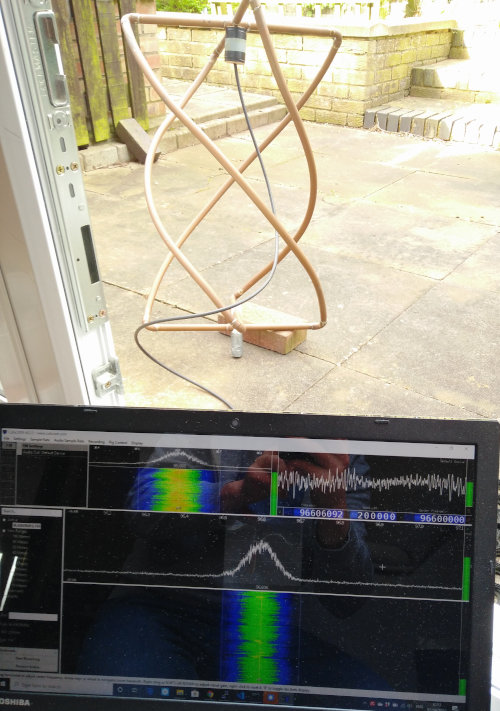 I’ve used an old QFH antenna built ~20 years ago which I successfully used for weather satellite APT receiving at the time so it will be interesting to see how results compare.

My station is now in testing state and does seem to be receiving some satellites, albeit with relatively weak signals. It’s a bit of a bodge for now, just outside the living room door (and cold!) rather than in the loft where I intend to install it permanently. I therefore only get a good view of high elevations to the west for the time being. I can get a good signal on a local FM station as pictured and have fiddled with the gain on 137 MHz for best results. 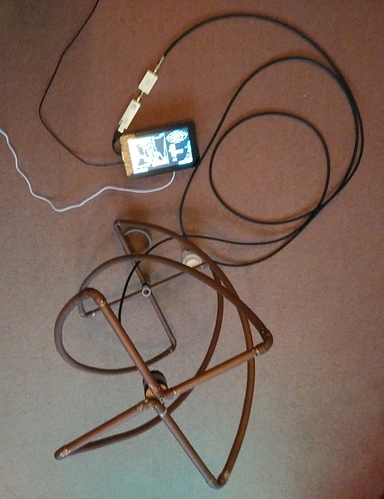 Following the Omnidirectional Station How To I’ve hooked up the antenna to a couple of metres of what I think is RG6 coax, to a Wideband LNA followed by an RTL-SDR v3 SDR. Obviously, it would make more sense to put the LNA closer to the antenna but I’m short of the right connectors right now. Will it make much difference putting it on the wrong end of this a short run of cable? Am I overloading the LNA by putting it so close to the SDR? I’ve also got a FM band stop filter but am assuming that’s best left out for now.

Although clearly it’s not a strong signal, I was pleased with a NOAA 19 observation earlier as it’s got some semblance of the calibration bands visible. This suggests things are working.

Similarly, my very first successful waterfall shows a promising signal if not quite in the centre of the waterfall. It also doesn’t look much like BPSK. This observation happened very soon after I’d fixed an issue preventing the waterfall being stored. Is this likely a local signal where the doppler shift hasn’t happened? Later observations show a lot more doppler in the background noise.

So, I’m assuming the main issue is setting my gain appropriately? (Currently set to 10.) Again following the Omnidirectional Station How To(Omnidirectional Station How To - SatNOGS Wiki) I had a go with various gains in CubicSDR with and without the LNA in-line and powered up. I appreciate the instructions there, but is there a rule of thumb of how much ‘blue versus yellow’ I should be aiming for on the waterfall? 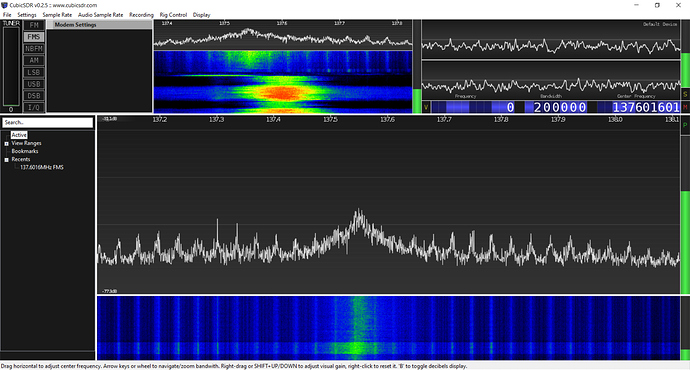 I also seem to be getting a fair bit of harmonics - what’s the likely cause of this? I presume it’s local interference as it’s quite regular across the 200kHz sample. Or is this too weak compared to the signal for me to worry about?

Not necessarily looking for answers, but would appreciate some pointers on where to look and what to try.

Similarly, my very first successful waterfall shows a promising signal if not quite in the centre of the waterfall. It also doesn’t look much like BPSK. This observation happened very soon after I’d fixed an issue preventing the waterfall being stored. Is this likely a local signal where the doppler shift hasn’t happened?

What you are seing is related to https://gitlab.com/librespacefoundation/satnogs/satnogs-client/-/issues/354

I also seem to be getting a fair bit of harmonics - what’s the likely cause of this? I presume it’s local interference as it’s quite regular across the 200kHz sample

What you’re seeing is definitely local noise. Looking through observations from your station, you are being swamped by it on every observation. With your antenna that close to your house, the performance of your station is very likely going to be limited by the level of that noise.
I would suggest turning things off around the noise to see if there is any obvious single source for the noise. If you can cut power to the entire noise (while still running the SDR) that would be a good ‘overall’ check, to at least confirm the noise is coming from your house.

Don’t read too much into the colours on the waterfall - just look for that rise in noise floor. Since you are definitely local noise limited, there’s no point increasing the gain any further once the noise floor starts to rise.

As for the BPSK observation that @surligas thinks might be related to another issue, the signal in that waterfall is very likely local noise. There hasn’t been a valid observation of 3CAT-2 for a while now. All the recent ‘good’ observations have been incorrectly vetted.

Also, don’t even bother placing the LNA right in front of the RTL-SDR. Just take it off (and be sure to turn off the bias t). I would crank the station gain (on the rtl) up to 40+ and start from there. My stations are running at the max gain right now (no LNAs) and that has proven to be the best situation for me (it will be different for everyone, of course). From what I’ve read, only a small percentage of people benefit from running max gain (and it IS causing some intermod problems for me, but not nearly enough for me to dial back the gain). 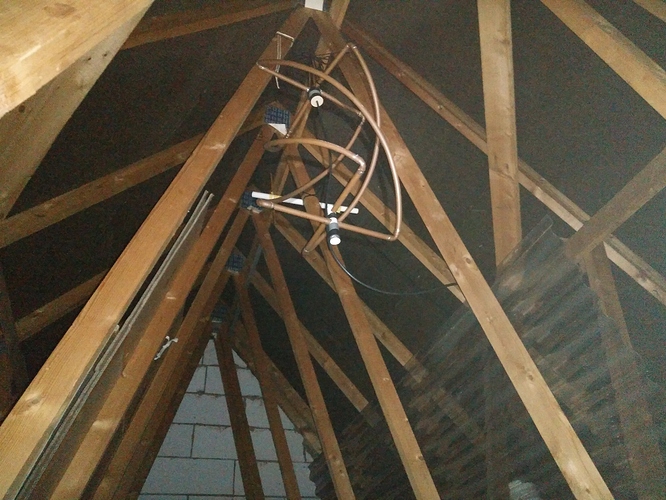 Thanks @vk5qi, I’ve put the antenna in the loft now and while there is still local noise, it’s far lower. I can get far more gain (20) before the noise floor rises appreciably. There’s likely more I can do and a quick power off of the house suggests there is some interference somewhere I need to track it down properly. Have far too many wireless and battery powered gadgets (e.g. Blink cameras) as well as Hue lighting that it’s non-trivial. 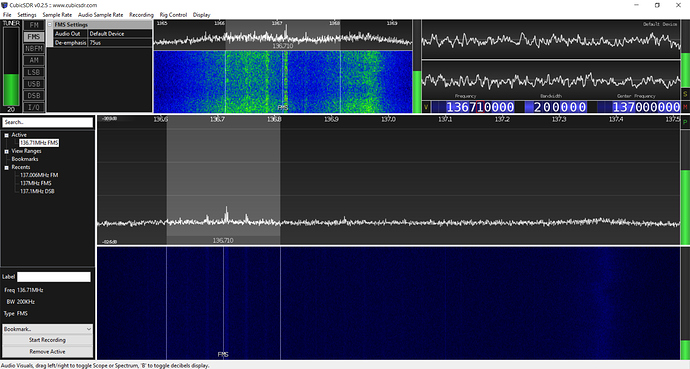 I’ll give that a go too @K3RLD, I’ve just been having fun after realising the bias-t wasn’t enabled so I’ll have to remember to turn that off first! Easy enough to do while the LNA is on the ‘wrong end’ though.

If you can wind up the gain enough on the RTLSDR such that the noise floor starts to rise, then the LNA probably isn’t going to help. You are essentially reaching the same system noise figure.

Where having a LNA really does help is in situations where the local noise is low enough that (when combined with coax losses) it is below the sensitivity of the SDR in use. That isn’t the case in your situation.

I’ll take it off and see how it goes. Now I’ve put the antenna back up the loft, I was expecting to need to put the LNA there in due course, but perhaps it won’t be necessary for a couple of metres of cable.

I’ve also now realised the beams holding the roof up won’t be particular conducive to a rotator in the loft.

welcome to the attic QFH club:

And after reading this thread through again, I think it’s time to re-evaluate my gain settings… My Friday afternoon project is experimenting with lower gains. It’s been a while since I’ve played with this…

I remember that antenna. I sent or posted the article on building it to you. I think you commented that bending the elements was not as easy as it looked. I am curious as to how it has worked out for you. I am getting ready to try building one. I have just upgrades my Raspberry PI to the current OS and am getting mixed results. But I think I goofed on setting the gain setting. I am doing some more tests to see if I get better results.

Other than my poor placement of it (in an attic, not far from a very noisy cable tv box), it seems to perform very well. Thanks!

Yes, my only complaint when building it was that the elements were nowhere near as easy to bend as described in the instructions. If I were to do it again, I would get the material that is half the thickness.

Thanks for the help. I need to fiddle more re: local interference, but having turned a lot of stuff off and left the station to it’s own devices I’ve had some good passes such as Observation #1977441 where I can clearly see the signal. It’s always a bit easier once I know what I’m looking for. That was with a gain of 40, no LNA.

I’m also waiting for another Pi to turn up as the one I’m using at the moment has a screen attached which is no doubt introducing it’s own interference.

I recommend all of you to put the system inside a metallic box. I think the RF Ground provided by the box improves the signal to noise ratio. 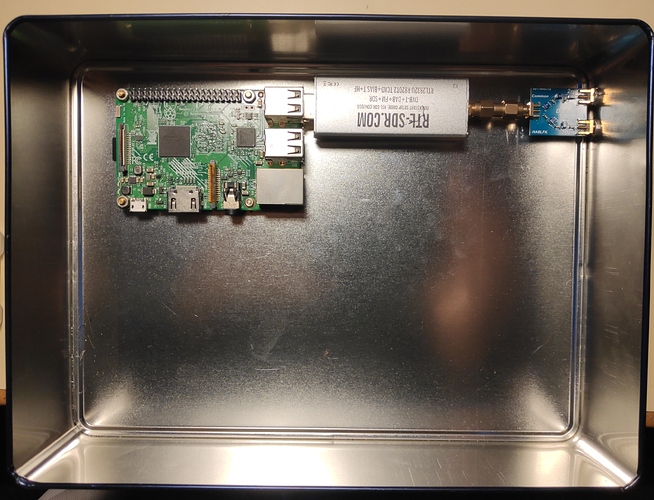 I started to look over the antenna plans again and realized the build appears to be modeled for the 2M ham band.And it also has a several turn choke balun for transmitting. I doubt those two items make much of a difference on receive. But have you ever tried transmitting with that antenna. And if so did a swr reading on it.

Good point @ea5wa. Once I get the new Pi, I think I’ll print a case for it and wrap it in kitchen foil. The RTl-SDR dongle seems to be well shielded in it’s own metal case and in theory the link is shielded, although I do wonder if a longer USB extension cable to distance the Pi a little would pay any dividends.

I’ve never tried to transmit or indeed check the SWR of the QFH @hobergenix. I do have a handheld which could transmit on the right frequency but no SWR meter unless my old CB one will do the job - I imagine not.

The quality seems far better than I remember getting from APT twenty years ago.

Very Nice Mat. I am jealous!

The Quad Antenna I was referring to was one built by K3RLD. I have attached the plans if you are interested. I am in the process of tuning up my build as well. Right now I only have a home brew ground plane. I am looking to put together a Turnstyle or Quad antenna next. Also working on getting
a permanent mount outside. I hope to get a POE to it so I can get rid of the battery setup. I need to get a good weather proof enclosure as well. I have learned and had so much fun with this project.

I know I did attempt to transmit from it, with no issues. What I don’t remember is if I took SWR measurement or what it was. I have a decent SWR meter and a NanoVNA - I’ll try and take some measurements of it today. I can’t do it without the balun, though, as that is integrated into the feedline (and I don’t want to take it apart).