SatNOGS performance and cooling on RPi4

I finally got RPi4 4GB model for my station upgrade. Can anyone share their experiences with Satnogs and RPi4 performance-wise? Also what do you use for cooling since the RPi4 produces significantly more heat.

I can’t see any performance issues on my pi4.
I use a plastic case (bad for cooling) and have placed small cheap heat sinks like these on the usb controller and the cpu. The pi is placed in the attic.

This is my Satnogs node (311) setup: RPI4 / 4G. No issues abt temperature and performance.
It’s housed in a plastic enclosure, right near the antennas, in external position. 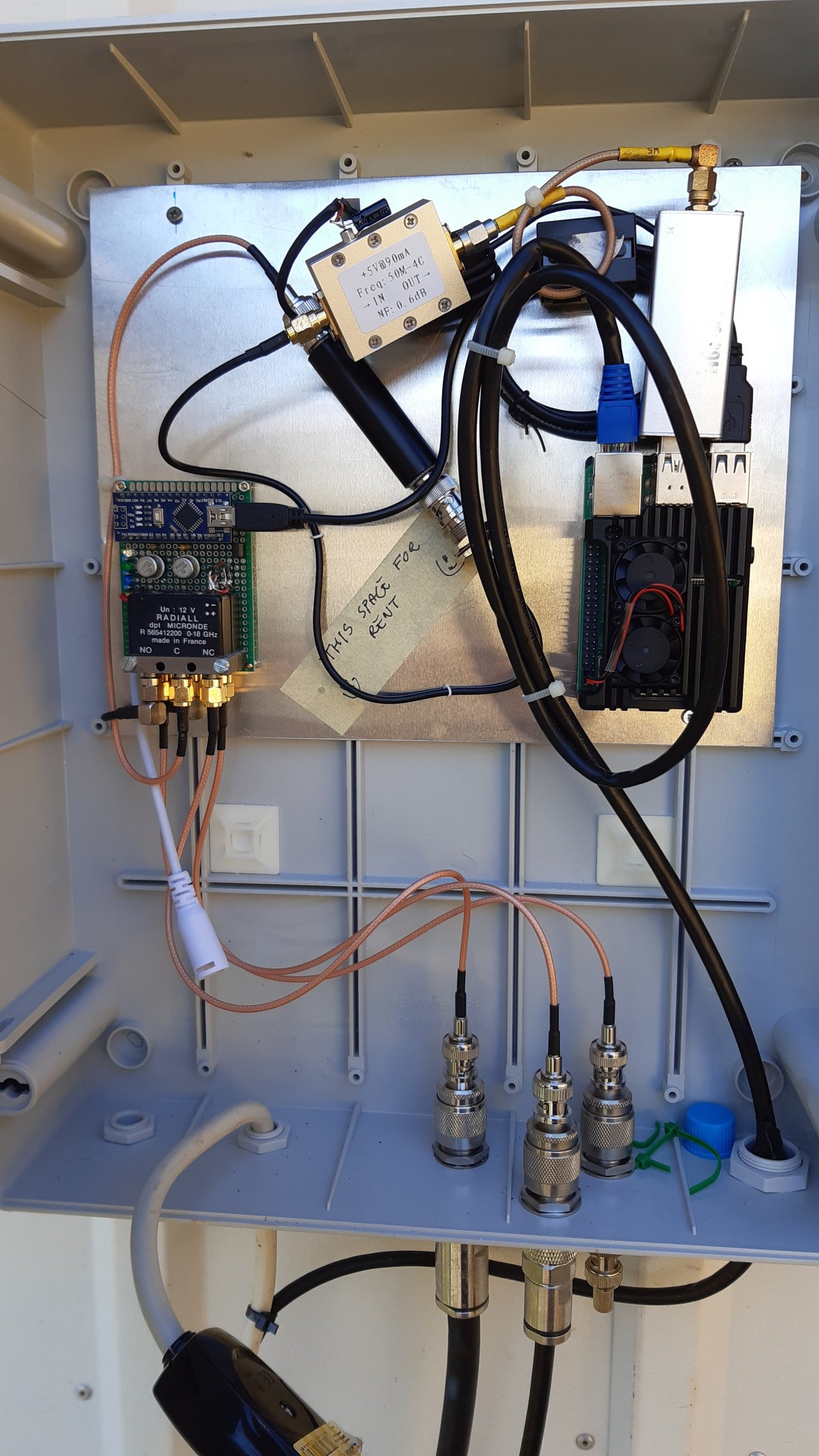 At the moment the LNA it’s missing cause maintenance, but there’s a 16 Gb USB dongle to record IQ.raw data ( I’ll write soon a post describing my solution abt recording )
Enjoy!
I3VFJ, Vittorio

I have had very bad experiences with Raspberry Pi 4 units and RF noise. Placing one near an antenna is a recipe for a high noise floor.

Have you done any testing of signals from the SDR with and without the Raspberry Pi 4 powered? Of course this would require a separate laptop to hook up the RTLSDR.

I’ve had a look through your observations, and for your setup I’m not seeing the SNRs I would normally expect from a turnstile station. You have adjusted your waterfall colour scales to make the plots ‘look good’ but this doesn’t mean that the observations are actually useful.

Yes, I agree but actually it isn’t so close (abt 8m, 2m from the mast base). Moreover it’s mandatory to use ferrite clamps, adopt a linear PSU, and switchoff the HDMI into RPI.
In the past the LTE router was in the same enclosure, making a lot of wb noise: moved in separate enclosure abt 20m away ( actually on the other side of the house, completely out of sight from the antenna) resolved the issue, checked as per your suggestion with a separate system.
Abt the SNR, as told, at the momento there isn’t any LNA, only RTL dongle; I agree that now the system is useful only as “go / no go” … This node it’s abt 40 km far from my home, so replacing & maintenance isn’t easy

I’m managing to switch from wb LNA to tuned amplifier, working in progress!
Also I’ve adjusted the waterfall dynamic range for two reasons: first to have the same scale over all the observations, next to “look better”, highlighing sats signals.
Looking at past observation I had nice SNR and good decoding from some sats ( Spooqy was the best, if I recall right).
Well, you know, testing / trying it’s the beauty of our activity, isn’t it?

Thanks a bunch for your replies, very good stuff. Also looking forward for @i3vfj post describing more details of his setup!

I decided I will add a small fan to my RPi4 so it doesn’t get throttled.

In my experience with all the rpi’s from old to new, the 4 is very prone to overheating and not behaving properly despite thermal throttling. Either add a small heatsink and a fan, or go for the heatsink cases that covers the entire motherboard.

Yeah, I noticed that so I ordered a full heatsink case and I’ll also add Noctua fan to it for good measure.