I have created a new station and it is on the map in testing mode. At the moment I have the RTLSDR connected to my 2m/70cm vertical that I use for regular ham work via about 50ft of coax. I’ve done some observations and am getting some signal but very weak.

My next step is to put together a more proper no-rotator setup. I’m looking at probably a 2m and a 70cm eggbeater or turnstile connected to a diplexer, then LNA, and then RTLSDR and RPI.

My question is this. I’ve seen some designs where the diplexer and LNA are put in a weather-proof box very close to the antennas and then low-loss coax used to go indoors to the RTLSDR+RPI. I’ve seen other designs where the SDR and RPI are also inside of the weather proof box and an ethernet, likely using PoE, goes inside.

Does anyone care to comment on which is the better design, or the pros and cons of each?

I know others have run the p-in-the-box-below-the-antenna setup with success, but I’ve spent a long time fighting against radiated noise at my station, and wouldn’t want a RPi, or any sort of switch-mode power supplies anywhere near my antennae.
Unless you know what you’re looking for, broadband noise can look like poor antenna performance, and it’s kind of difficult to cut power to various items to debug when your receiver is up a mast, being powered by said power supplies.

i’d be going with the preamp-at-antenna approach, and run coax cable. It doesn’t need to be super low-loss cable if you have sufficient gain at the far end. Depending on the run length RG58 would probably be fine, but use better if you have it.

A short cable reduces attenuation of the useful signal. So do radarspotting fans. These setups use a SAW filter. 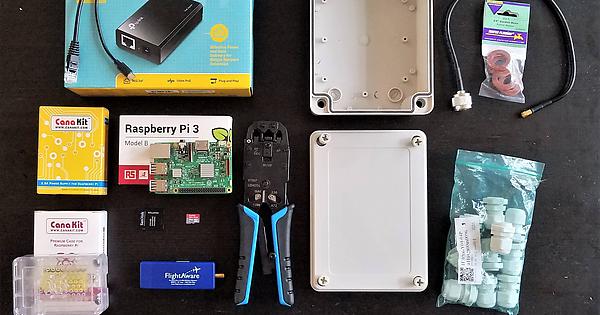 I’m about to start designing my own enclosure to go in the loft of my house, as close to the antenna as I can do.

It’ll house an RPI 3B+, a NESDR Smart+, LNA4ALL, and will feature shielding between each of those components (I chose NESDR Smart+ as its in an aluminium enclosure to begin with), along with airflow passages for a 40mm fan, thinking that if it goes outdoors at some stage, direct sun will likely heat it up fairly significantly.

Once the design is done I’ll pop it on Thingiverse, even if it only serves as inspiration for another generation of enclosure!

Indeed, one of my concerns about putting the RPI in a weatherproof box close to the antenna is heat and lack of ventilation. I too have thought about finding a way to put the antenna close enough to a building such that the electronics can be inside and add some ventilation as @dan0h indicates. But I think in my case the antennas will probably more likely be some distance from a building. I’ll probably start by trying a setup as @vk5qi suggests with an LNA at the antenna and the SDR+RPI at the end of a longer feedline. If that doesn’t work, then I’ll explore the possibility of putting everything close to the antenna.

Thanks @rumlin for that link. If nothing else I like the enclosure that that project is using.

I’ll probably start by trying a setup as @vk5qi suggests with an LNA at the antenna and the SDR+RPI at the end of a longer feedline. If that doesn’t work, then I’ll explore the possibility of putting everything close to the antenna.

IMO a very low noise LNA with an omni antenna doesn’t matter: temperature “seen” by an omni antenna it’s about the ground temperature… abt 290°K, that it’s abt 3 dB NF.
Lowest NF are efficient in case of directional antennas ( directional arrays, dishs and so on).
In my Satnogs stations LNA is abt 1.8 dB, enough to see some noise rise with a 50 ohm dummy load connected / disconnetted at the antenna socket, so (raw assumption) my receiver can “see” a 50 ohm resistor at ambient temperature.
Obvoiusly, putting LNA near the antenna it’s the best practice but, in my case, they are connected with good feeders and near the receiver… maintenance it’s much more easy