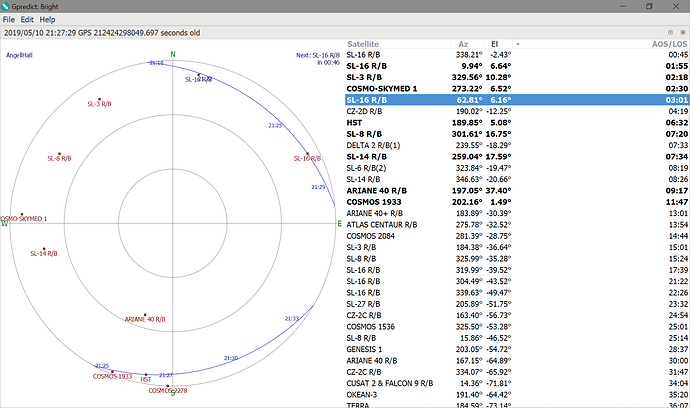 image1825×1080 120 KB
Hello,
The minimum elevation limit does not seem to be applying when passes are selected. In the above image, the minimum elevation is 15 deg, but at least two of the passes peak at less than that. I did notice the minimum elevation has an effect when right clicking on a satellite and selecting “Future Passes”. It will take out passes where the max elevation is less that 15 deg. The same logic does not seem to be applying to the current pass however.
It would be nice if the minimum elevation option governed the start and end times of the pass. For example, if I put a min elevation of 15 deg, the AOS would be when the satellite crosses 15 deg.
It would also be nice to be able to see the max elevation of a pass in the upcoming passes view. That value is currently in the table when you right click on a satellite and select the “Future Passes” option, but it would be more useful to be able to compare passes from different satellites directly in the upcoming passes view.
I am running GPredict v2.2.1 on Windows.
Thank you.
csete May 11, 2019, 8:38am #2

Which passes are you referring to? I see no pass predictions in the attached screenshot.

The minimum elevation is under the prediction settings and therefore it applies to pass predictions and not the real-time information. There are two open issues (#6 and #75) to make it more clear and less confusing.

I was referring to pass paths in the polar view. They don’t get higher than about 10 deg.
Ah yes, the issues on GitHub are the same as what I was experiencing. I guess the workaround is to right click a pass that is coming up and see if the next pass for that satellite is in fact the one being displayed in the upcoming pass list. If it is, then you know it will get over the elevation limit. If the next pass is actually in several hours, then you know the one being displayed is not going to exceed the elevation minimum.
The elevation limit does not apply to passes listed in the table view either. This seems like an important feature. Do you know when it will be fixed?