Map can’t be rendered:
Your browser does not support MapboxGL (WebGL required). 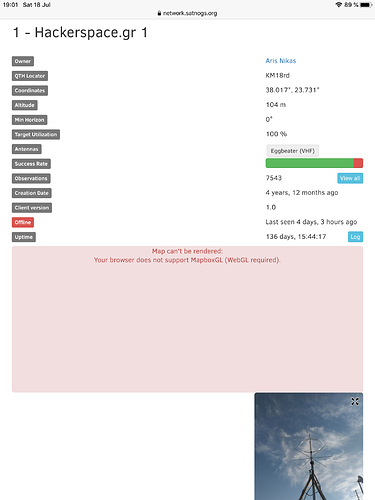 Seems like some sort of regression; the map feature has worked before.

We have moved to mapbox-gl-js for quite some time now (over 2 years) and indeed one of the side effects is that older browsers with no WebGL support are not displaying the maps.

2 years? The maps worked for me about a week ago.
Not sure about what you mean by older browsers, my iphone and ipad are fully updated.

My two month iPad Pro failed to display the map for the first time today. Something just changed?

hm… that’s strange, we haven’t done any change recently that should affect that part of the site. Unfortunately I don’t have an apple device to check. Maybe there will be an error in browser console but I don’t think it is easy to get it in iphone and ipad, maybe if this is reproduced on a mac we can find out.

Please also add details about the browser (which one) and its version. Thanks!

All browsers on iOS must use WebKit as rendering engine, per decree from Apple.

These are the versions installed on my ipad right now

I can install Safari on my PC later today to check if there are any messages in the console.

https://get.webgl.org/ shows a rotating cube on my ipad
https://docs.mapbox.com/mapbox-gl-js/example/check-for-support/ shows a map

(Both pages were linked from https://docs.mapbox.com/help/troubleshooting/mapbox-browser-support/ )

This happened once before. Satnogs Network Monitor

Does the Satnogs web site have some sort of change tracking? I searched amon the librespace repos on gitlab, but wasn’t able to find anything that looked like it could contain the web site.

Yea two posts down if was found in that thread that something happened with the CSP back then. Thats why i linked it.

Satnogs Network Monitor is where the change that fix it that time was mentioned.

I have created an issue: https://gitlab.com/librespacefoundation/satnogs/satnogs-network/-/issues/749

@mfalkvidd thanks for opening the issue. Can you also check the map at db.satnogs.org for example in https://db.satnogs.org/satellite/25544/

I can check the db map on my iOS device later today.

mapbox-gl.js:33 Refused to create a worker from 'blob:https://db.satnogs.org/3eba46fa-0f96-4b0e-a0c0-8aeb28bf8cdc' because it violates the following Content Security Policy directive: "script-src 'self' https://*.google-analytics.com 'unsafe-eval' https://db-satnogs.freetls.fastly.net". Note that 'worker-src' was not explicitly set, so 'script-src' is used as a fallback.

Please re-do your tests/checks using your available browsers against network-dev.satnogs.org and db-dev.satnogs.org and confirm that you can see the map fine. If everything works, soon we will deploy the changes in production, after finishing some other ongoing work.

Both dev sites look good on my ipad.

Was this ever fixed for production version? I’ve previously had this issue on Firefox, so I switched to Safari. Since this thread has started I’ve also had issues on all other browsers and devices. Any tips? I thought that it’s because of restrictive web browser or some adblock, but it happens on devices without any blocking as well. Thanks!